On the Ground at the Border 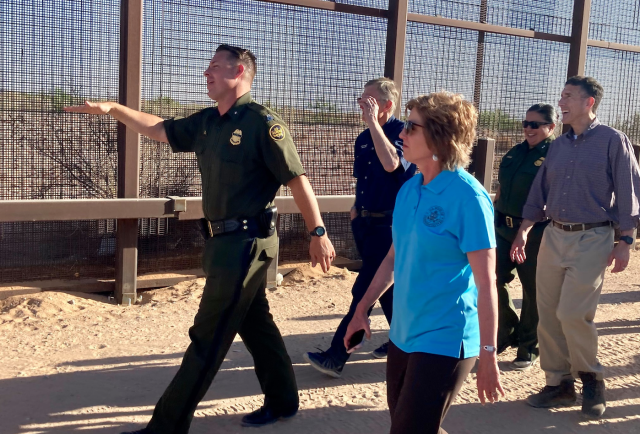 This week, I traveled to El Paso, Texas, to see our border crisis firsthand. It was jarring and an eye-opening experience to say the least. While President Biden and Vice President Kamala Harris have yet to see this humanitarian catastrophe in person, I felt it was vital to meet with our border patrol agents and examine our efforts closely. 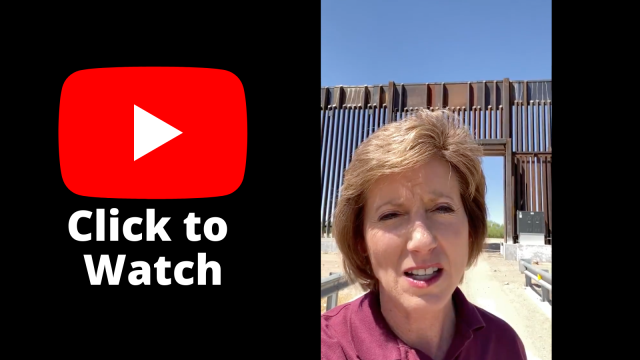 Given America has just seen 178,000 illegal border crossings last month, it underscores the urgent need to finish our border wall. Sadly, President Biden halted its construction on his first day in office. This is unacceptable -- and damages our national security.

In the video above, our border wall gate is in need of repair but can’t be fixed because of the current administration. Now, a border patrol agent must be pulled away from other important duties to stand guard and cover up the vulnerability. What a waste! 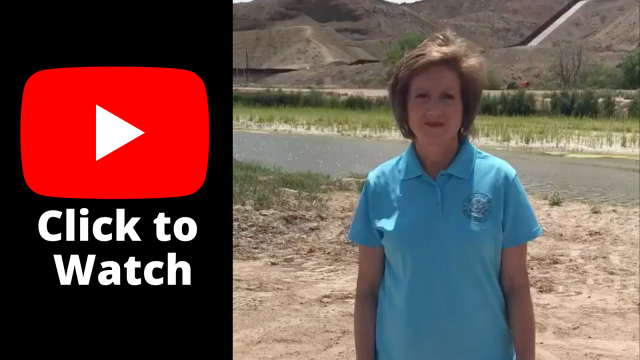 President Biden's border policies also incentivize children to come to America illegally without their parents, where some are assaulted and ultimately have nowhere to go once they arrive. Border patrol agents told me that close to 50 percent of unaccompanied children do not have a sponsor upon arrival, making them prone to further human trafficking.

That is not compassionate. That is cruel.

At the El Paso North Border Crossing Station for the Customs and Border Patrol HQ, we saw how CBP turned their normal pedestrian and vehicle processing center into a daycare center for housing children for several months this year. This took CBP agents away from their mission of stopping drugs and criminals from coming into our country.

The CBP has worked valiantly despite the challenges, interdicting a 600% increase in fentanyl and equal amounts of opioids over just the past five months. The drug cartels are taking advantage of the migrant flow, moving as many drugs across as possible with CBP officers pulled away from their regular jobs. 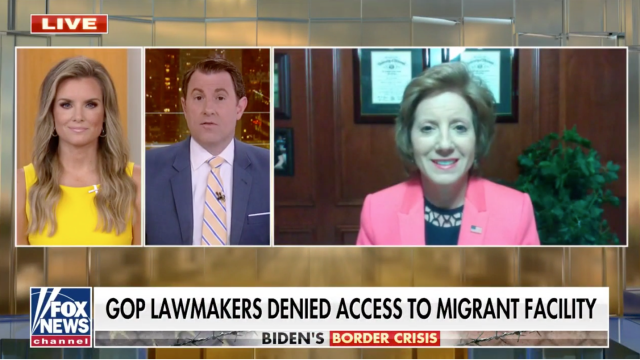 The congressional delegation was also denied access to the El Paso Intelligence Center, which provides tactical intelligence to federal, state, and local law enforcement agencies on a national scale -- with an emphasis on our U.S. - Mexico border. This includes watch operations, tactical operations, and research/analysis. We must solve this crisis – and it starts with getting access to critical information.

Our border patrol agents have seized over three tons of fentanyl in 2021 alone, encountered record numbers of illegal crossings, and is spending American taxpayers’ money on illegal immigration with no end in sight. My time in El Paso made it clear: we must finish the wall and put an end to President Biden’s border crisis.

I am proud to release the latest episode of our China series this week detailing the nation’s malign influence. The lengths China will go to in its espionage efforts are truly disgraceful — spying on our education institutions, stealing our valuable research, and taking advantage of our free and open society.

As we examine the full scope of China’s threats towards our nation, we must discuss their attempts to conduct malign influence operations within our own borders. The video is available to watch now. 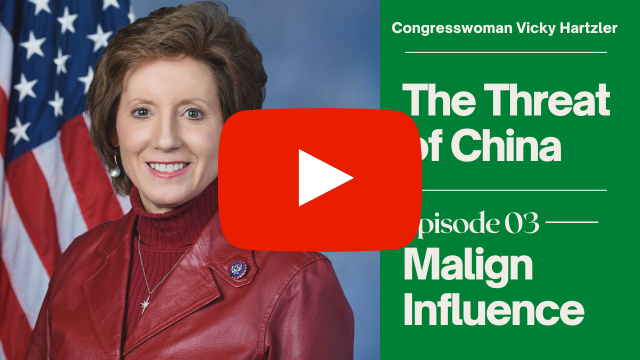 As always, feel free to send me an email at HartzlerQuestions@mail.house.govwith any questions you may have on this engaging series. 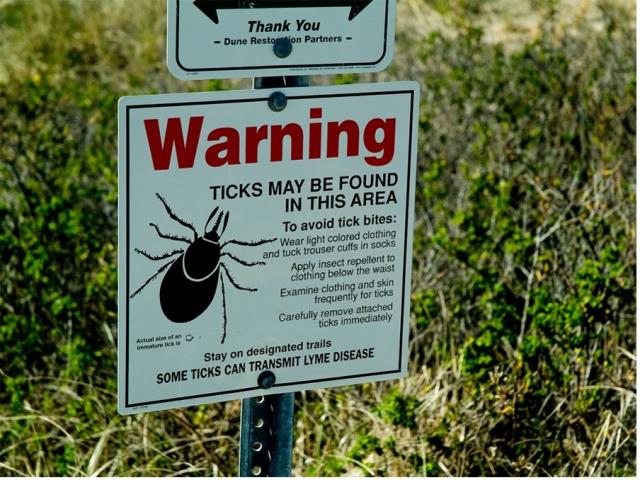 It’s officially that time of year: tick season. Luckily, Fort Leonard Wood has released a guide to help our state get through this period with some helpful safety tips. Here are a few steps we all can take:

In Washington, I’ve also introduced a resolution in the House to designate the month of May as “National Lyme and Tick-Borne Disease and Conditions Awareness Month.” With 476,000 new cases of Lyme disease annually throughout our nation, this initiative will hopefully bring greater attention to an illness that currently has no known cure. 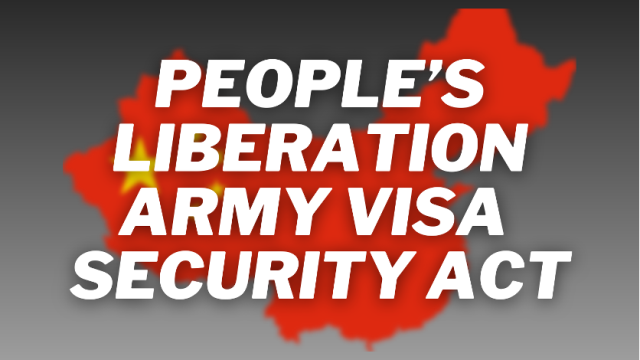 I was honored to partake in two tremendous rural broadband announcements on Thursday, which is welcome news in Missouri.

In Butler, I spoke at an event where Osage Valley Electric Cooperative unveiled their partnership with internet service provider Conexon Connect. They will invest $75 million in a world-class fiber-to-the-home network and give access to Gigabit-speed broadband internet for our rural communities. Thanks to this effort, more than 16,000 homes and businesses in Cass, Bates, Henry, Saint Clair, Johnson, Benton, and Vernon counties will have access to increased internet speeds starting at the end of 2021 with the total project taking five years to complete. 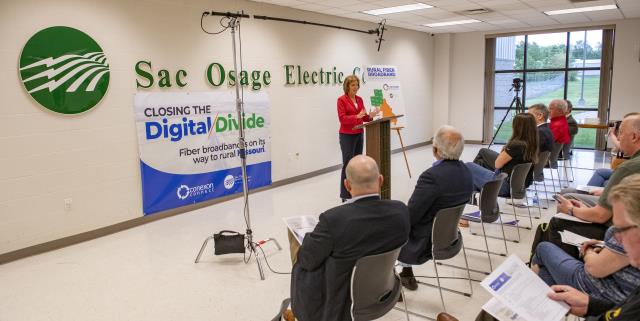 I was also in El Dorado Springs as the Sac Osage Electric Coop announced similar plans with Conexon Connect. Through their $52 million investment, 8,700 homes and businesses in Henry, Benton, Saint Clair, Hickory, Vernon, Cedar, Barton, Polk, and Dade counties will be upgraded with fiber-to-the-home network and Gigabit-speed broadband internet by the beginning of 2022 with the total project taking four years to finish.

With nearly 20 percent of rural Missourians still lacking vital access to high speed internet, I am glad to see our state is receiving much-needed improvements for our families, neighbors, and rural businesses.

Open for Business in the Fourth District 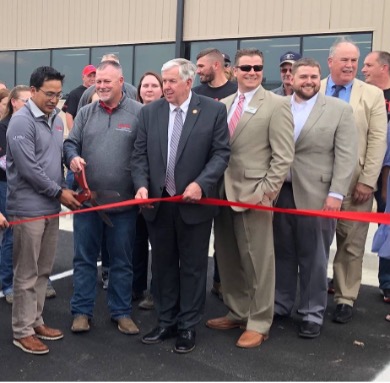 It is always great news when businesses open their doors in Missouri’s Fourth Congressional District and create jobs. That’s exactly what happened this past week as Swift Processed Foods held the grand opening and ribbon cutting for its ready-to-eat, fully cooked bacon facility in Moberly. The new plant will hire approximately 200 people, with a starting wage of $16 an hour and salaries increasing to $20 an hour after 36 months on the job. For anyone who has any doubts – MO-4 is a great place to do business with a top notch workforce!