Last week I had the chance to see the best and worst of humanity when I traveled to Poland as part of a Congressional delegation. 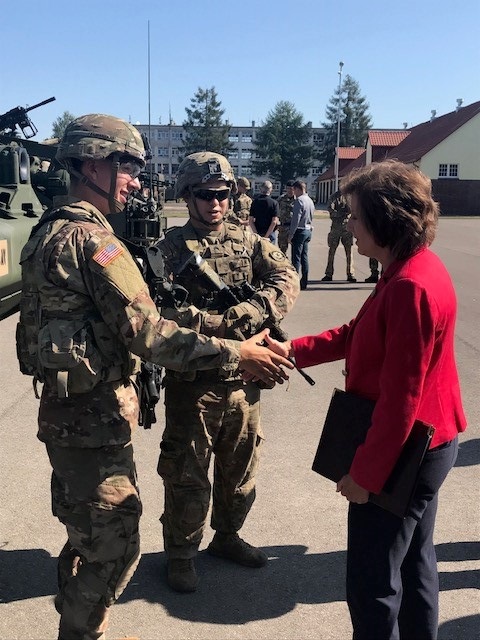 Enjoying my visit with the Battle Group Poland in Orzysz, Poland.

Some of the best of humanity came in seeing our U.S. troops stationed in Poland, partnering with a multinational group called the “Battle Group Poland” to act as a deterrent to regional aggression. 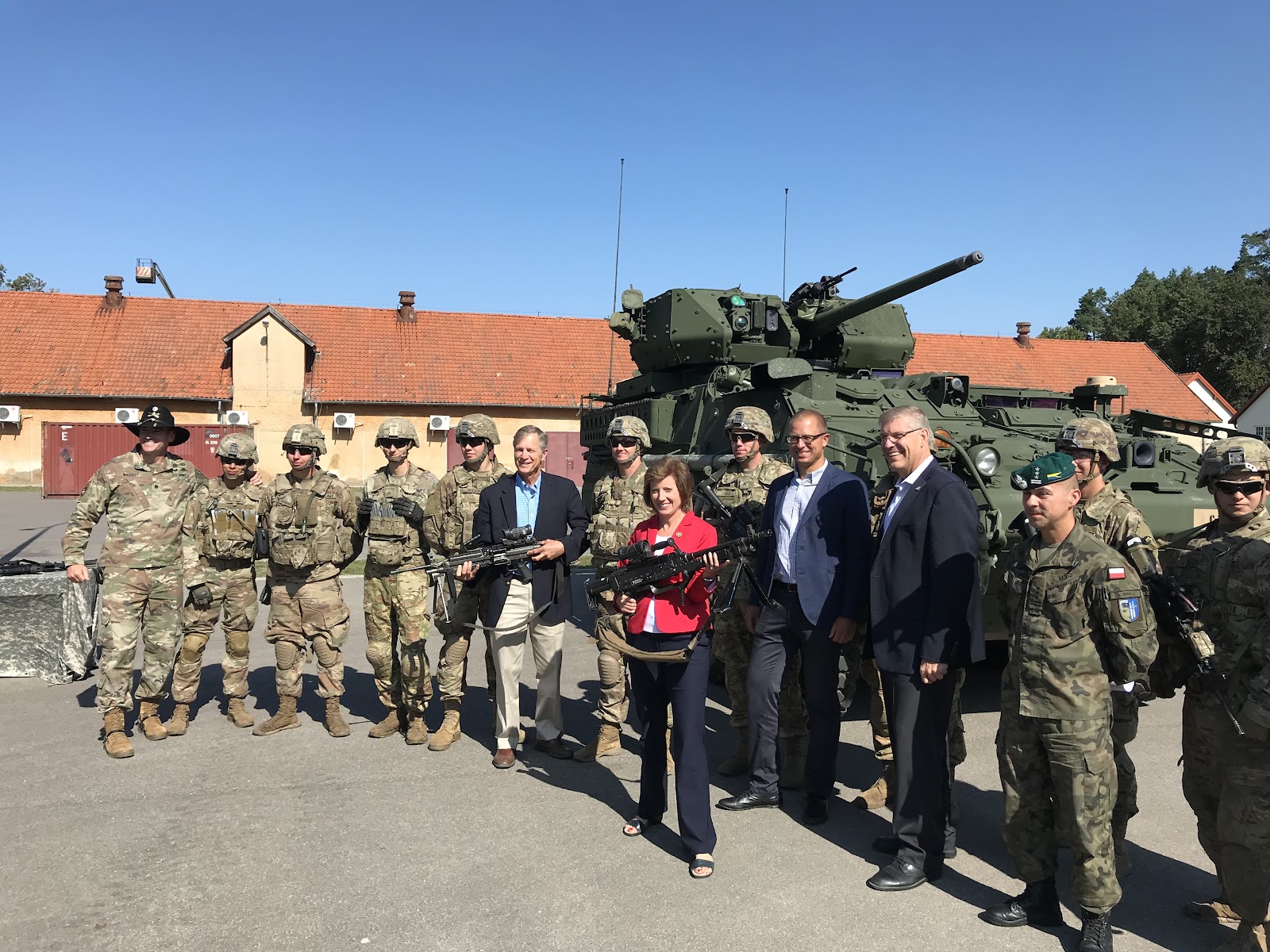 I met with the 2nd Cavalry Regiment, which is leading multinational exercises with our allies in Poland to act as a deterrent against regional aggression. 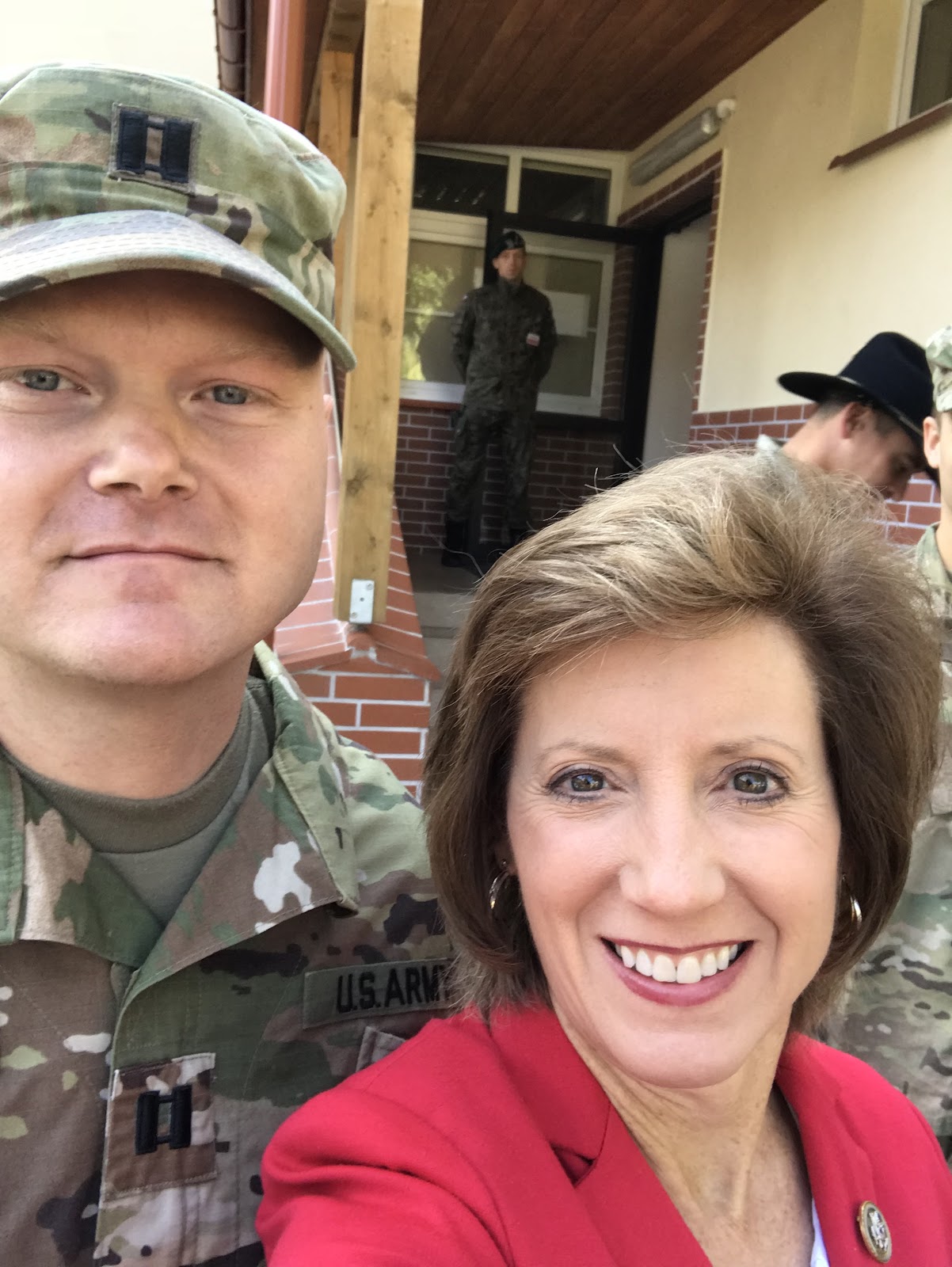 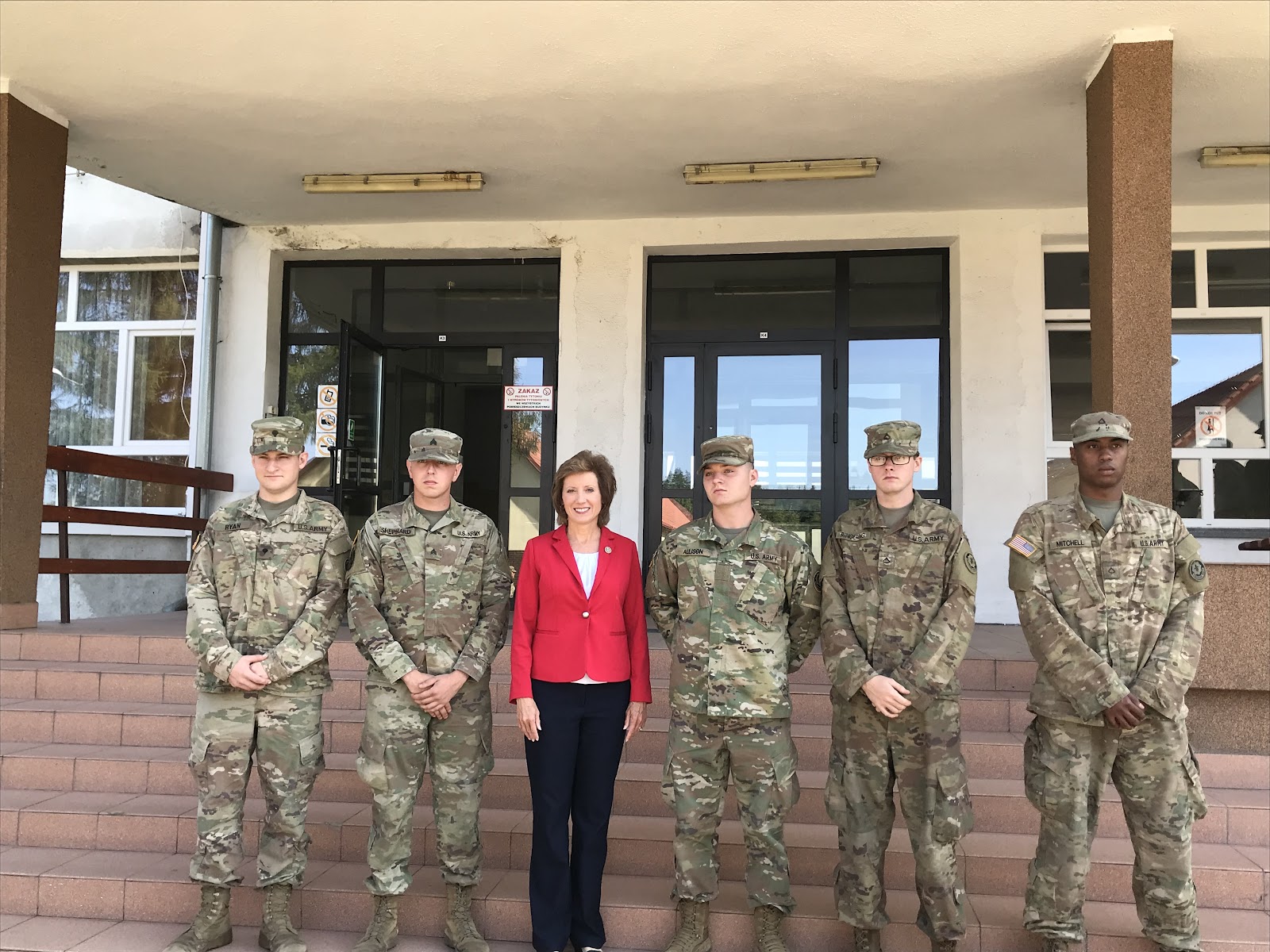 I had the opportunity to meet with U.S. troops from Missouri, too, while I was in Poland. On the left, I am pictured with Captain Woolery.

I met with Mission Commanders and Poland’s Deputy Minister of Defense Tomasz Szatkowski, visited with troops from Missouri, and saw some of the equipment they use in their training. 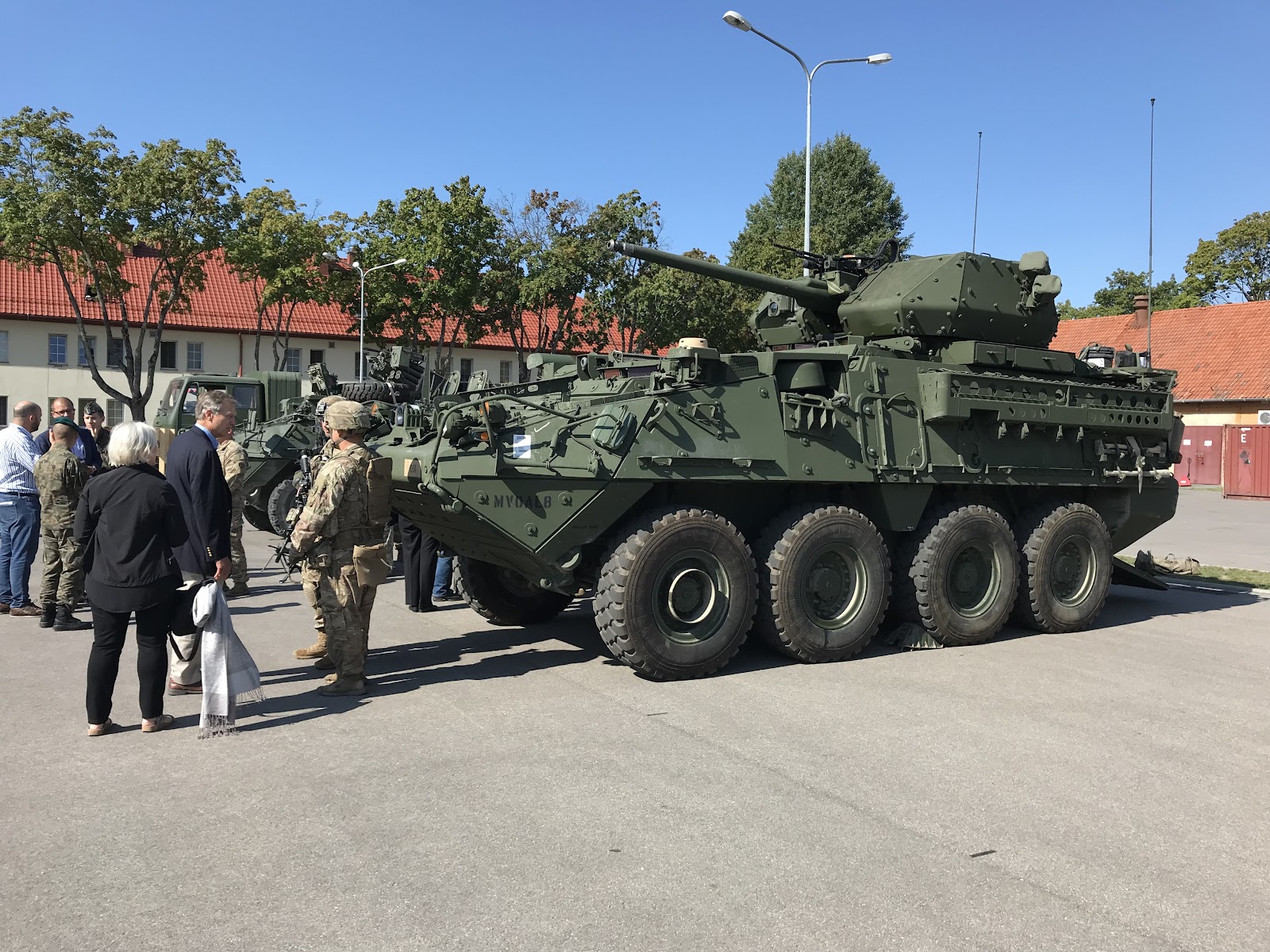 A Stryker that has been newly outfitted with a 30mm gun turret that Congress recently approved.

The 2nd Cavalry Regiment is currently leading the multinational exercises, and they are the only U.S. Army unit with Strykers (eight-wheeled armored fighting vehicles) outfitted with new 30mm gun turrets that Congress recently approved. This new equipment will give them the more firepower when confronted by an aggressor.

The Battle Group is located in Orzysz, near the Suwalki Gap, a land strip that touches Northeastern Poland, Belarus, Lithuania and Kaliningrad, Russia. Its locale sends a powerful message to those nearby who might want to invade Poland’s borders: that we and our allies stand strong with Poland against invasion.

In World War II, Poland was invaded by not one, but two of its neighbors within 16 days: the Germans from the west and the Russians from the east. As a result, its people were overrun by Hitler’s Nazis who moved to exterminate the Jews in concentration camps and systematically carry out unspeakable horrors - an example of the worst of humanity. 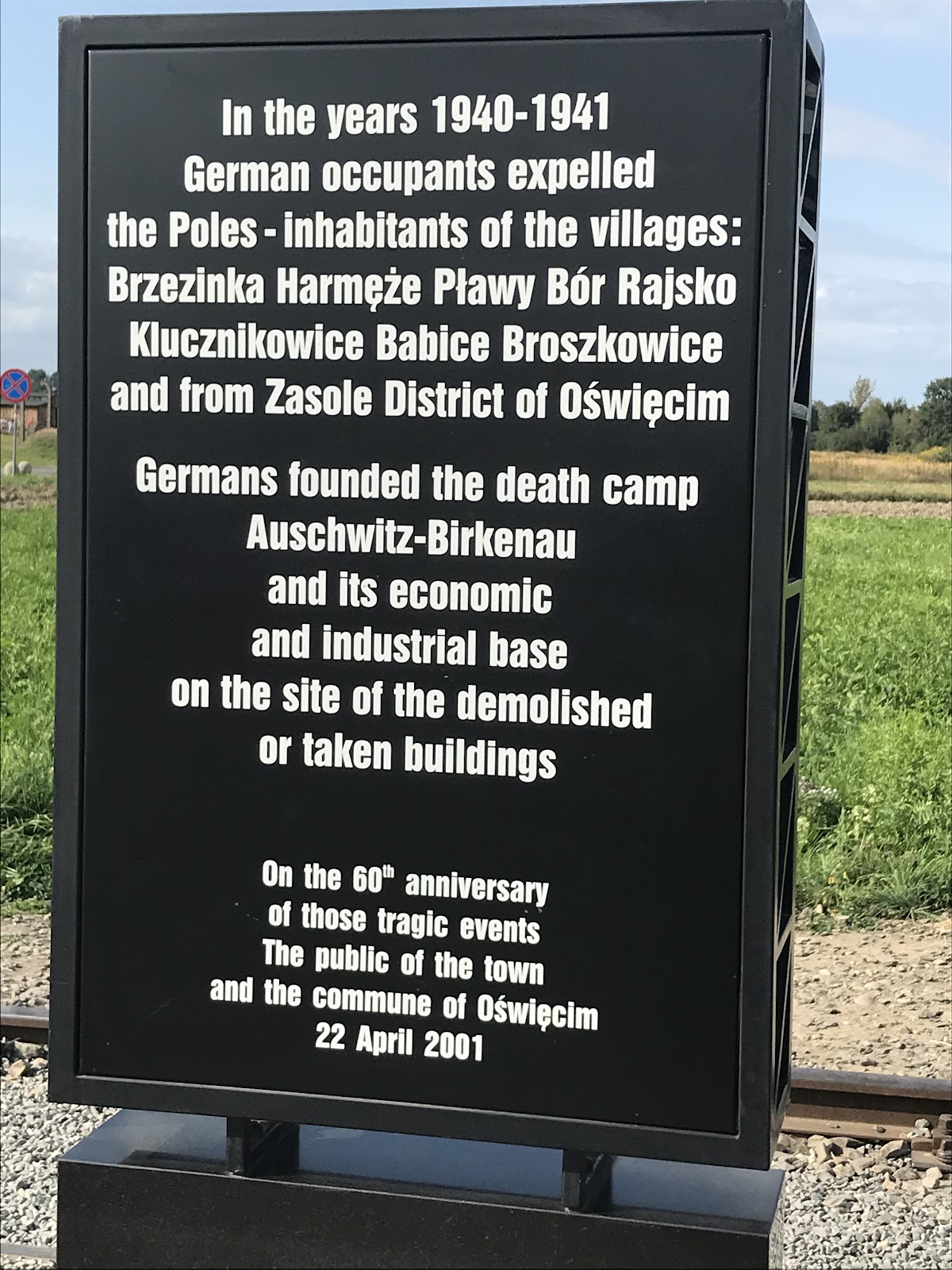 As we arrived to Auschwitz - Birkenau, we approached this sign describing what happened there.

I had the opportunity to visit two of these concentration camps at Auschwitz, which is comprised of three separate camps within a span of a few miles. The original camp was like a small city with rows of 2-3 story brick barracks and headquarter buildings. Prisoners were worked to death or tortured for minor infractions here. Birkenau, the second camp, was mainly for extermination. Here, trains brought in thousands of innocent people who were marched off to the gas chambers within minutes of their arrival. Thirty percent of them were given work assignments and housed in squalid conditions in barracks. This complex held over 100,000 people.  We did not tour the third site. 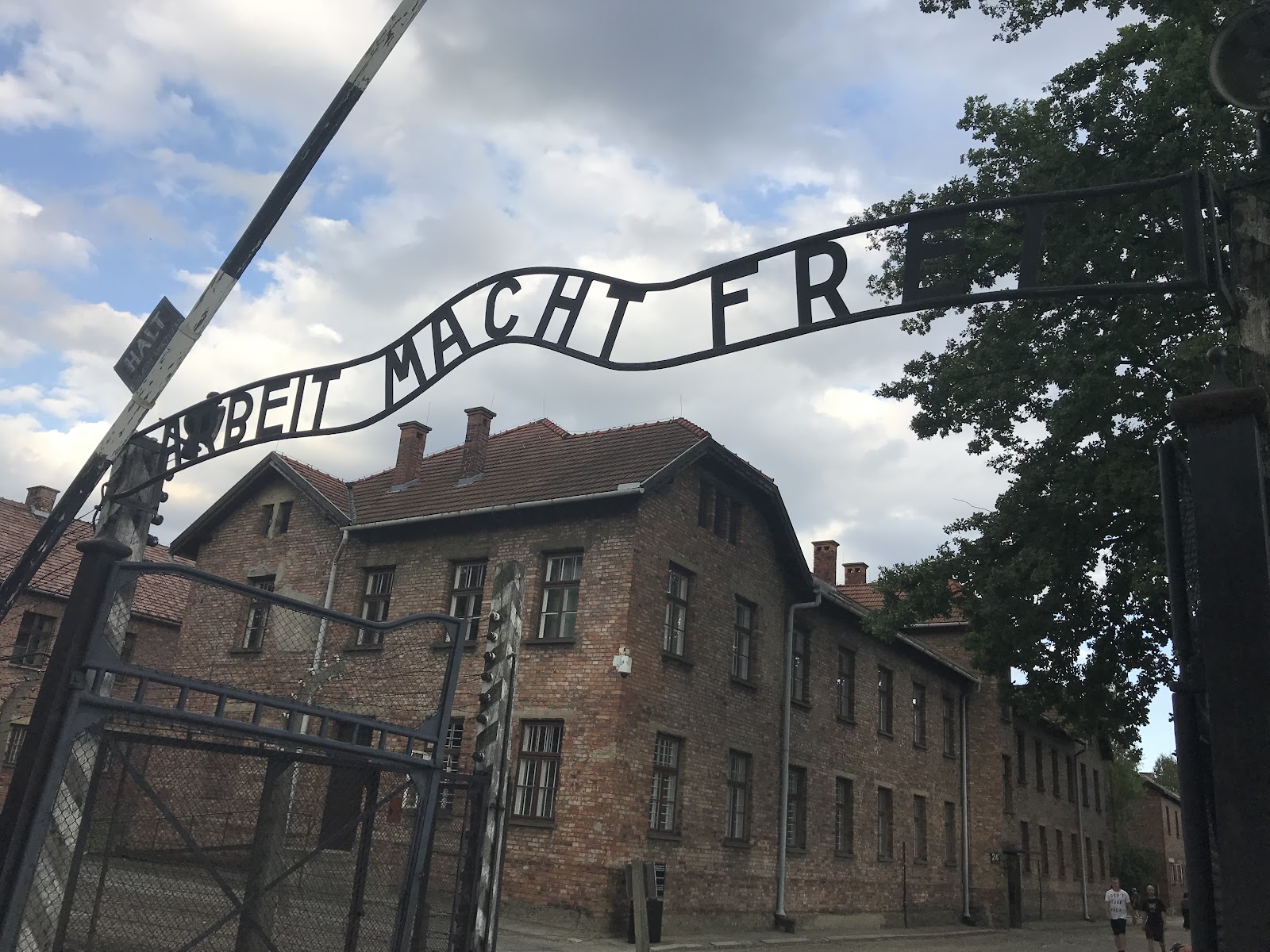 The famous sign at the entrance of the Auschwitz Concentration Camp, featuring the deceptive German phrase, “Work sets you free.” 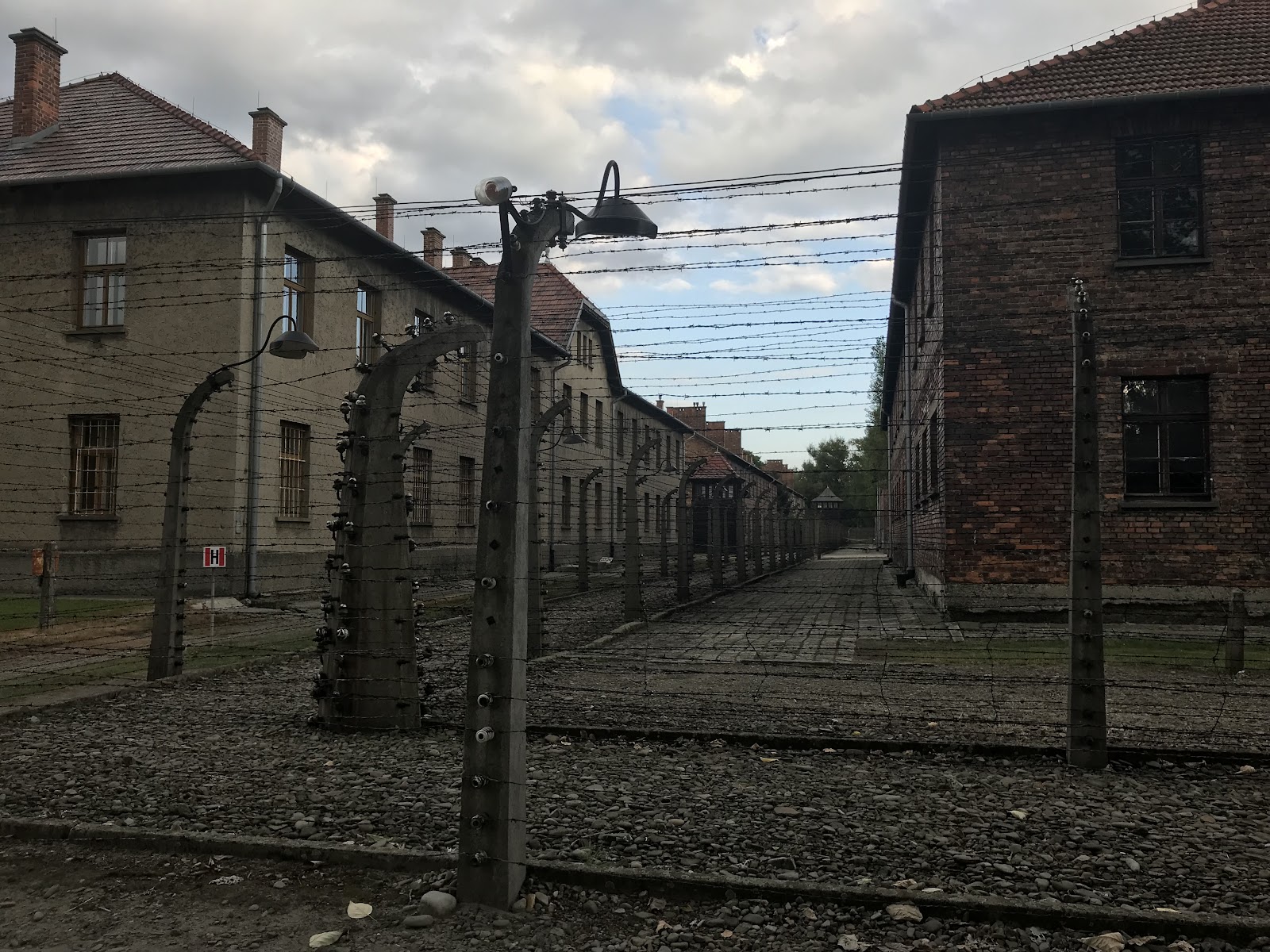 The barbed wire at the edge of the Auschwitz Concentration Camp that contained the prisoners. 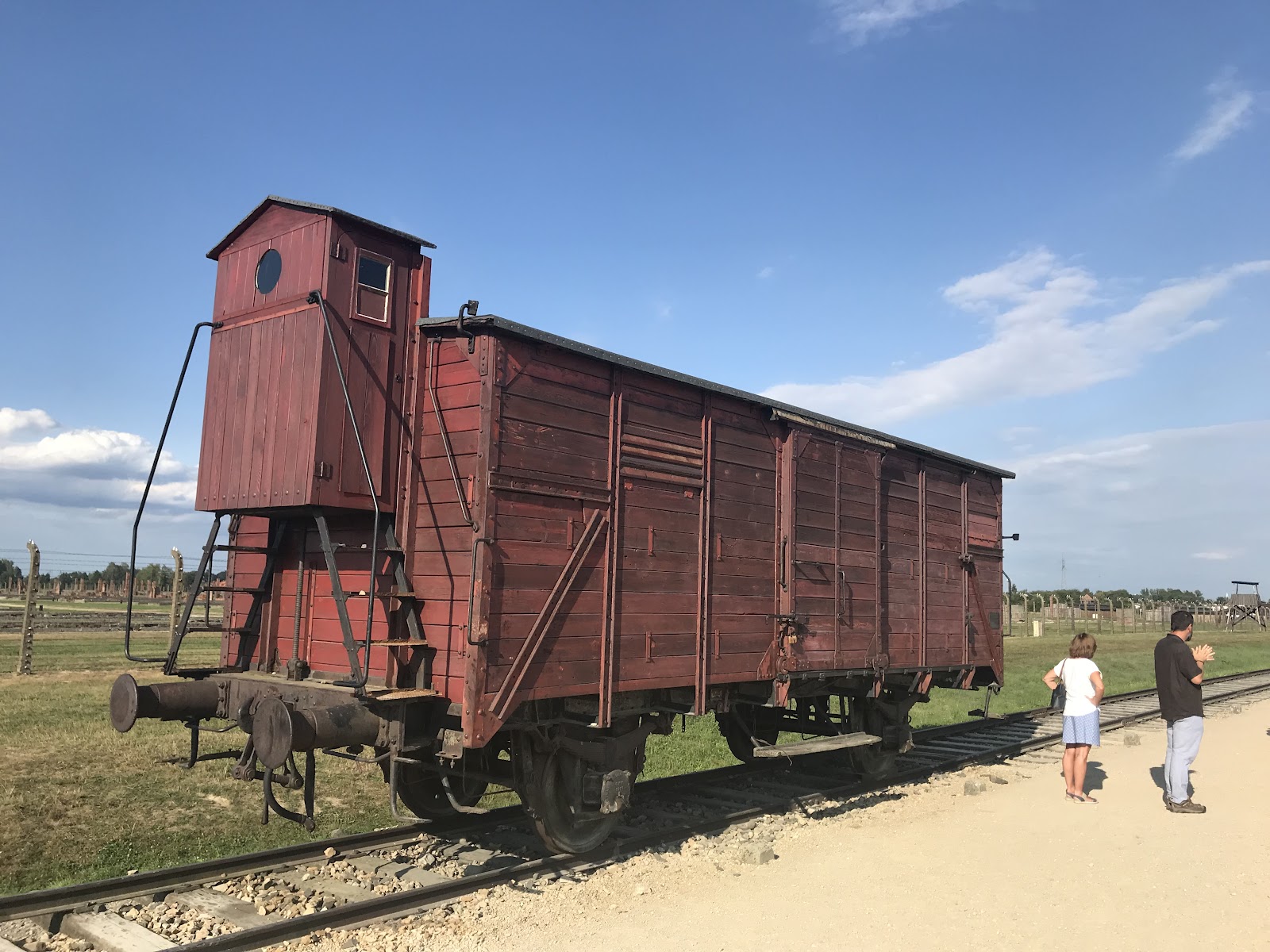 One of the train cars that would transport Jews to the Birkenau extermination camp. Jews from as far as Greece and Hungary were shipped here to die. 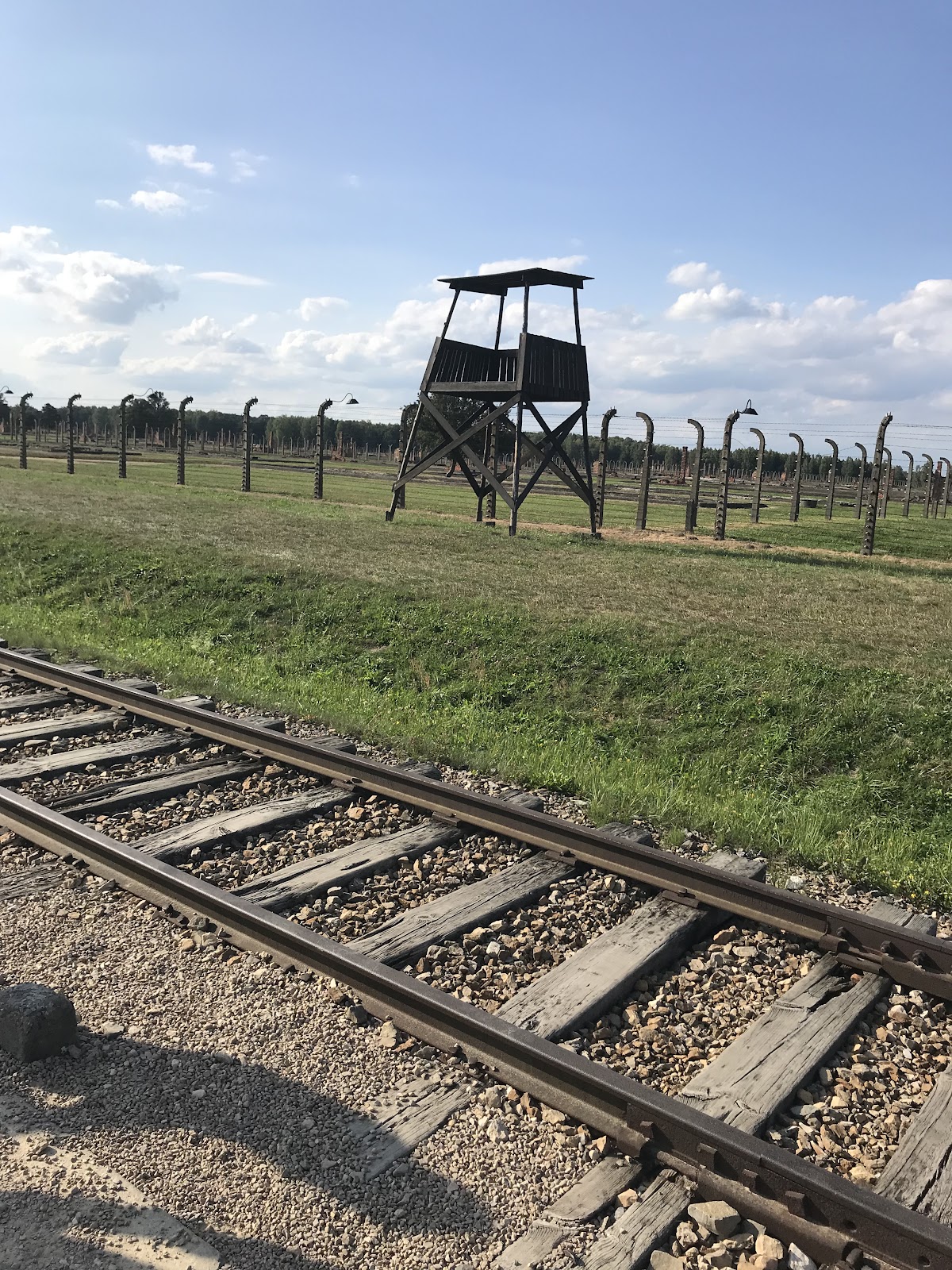 One of the guard stands where Nazis could survey the camp to ensure no one was allowed to escape. 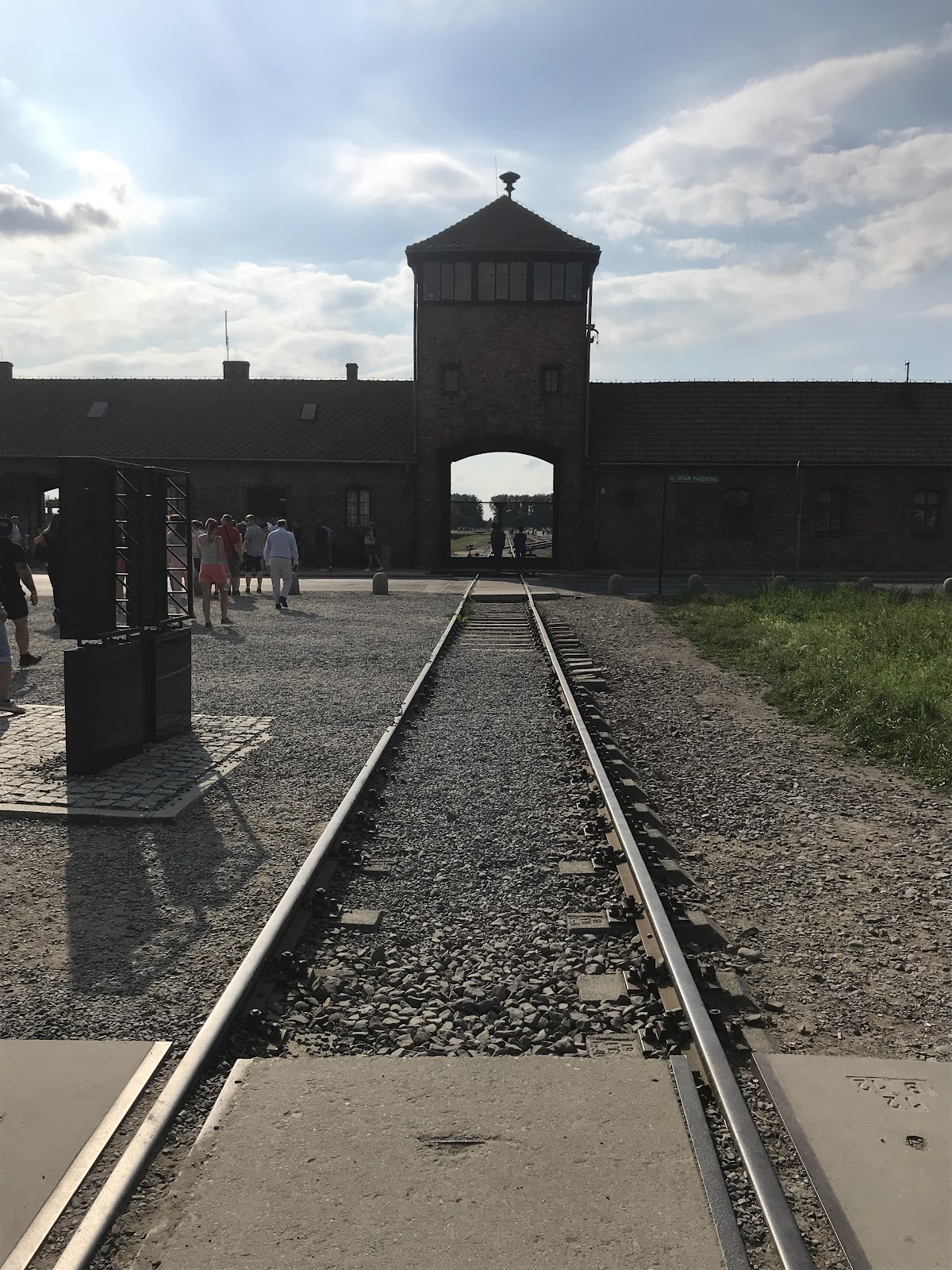 The entrance to Birkenau. Nearly half of the 6 million European Jews who died in WWII died in Poland. 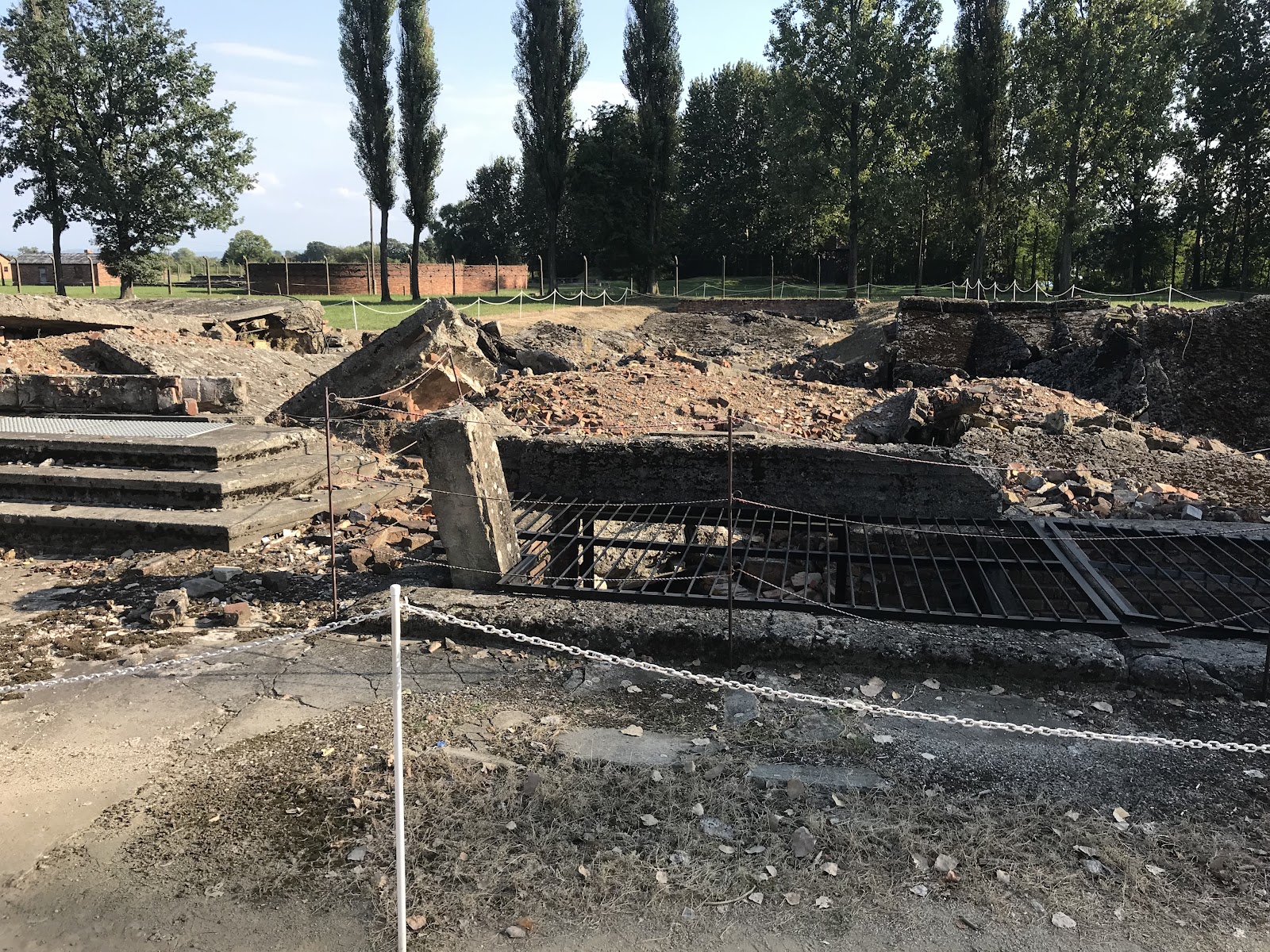 What's left of one of the gas chambers at Auschwitz, which was blown up and burned by the Germans before they fled at the end of the war. 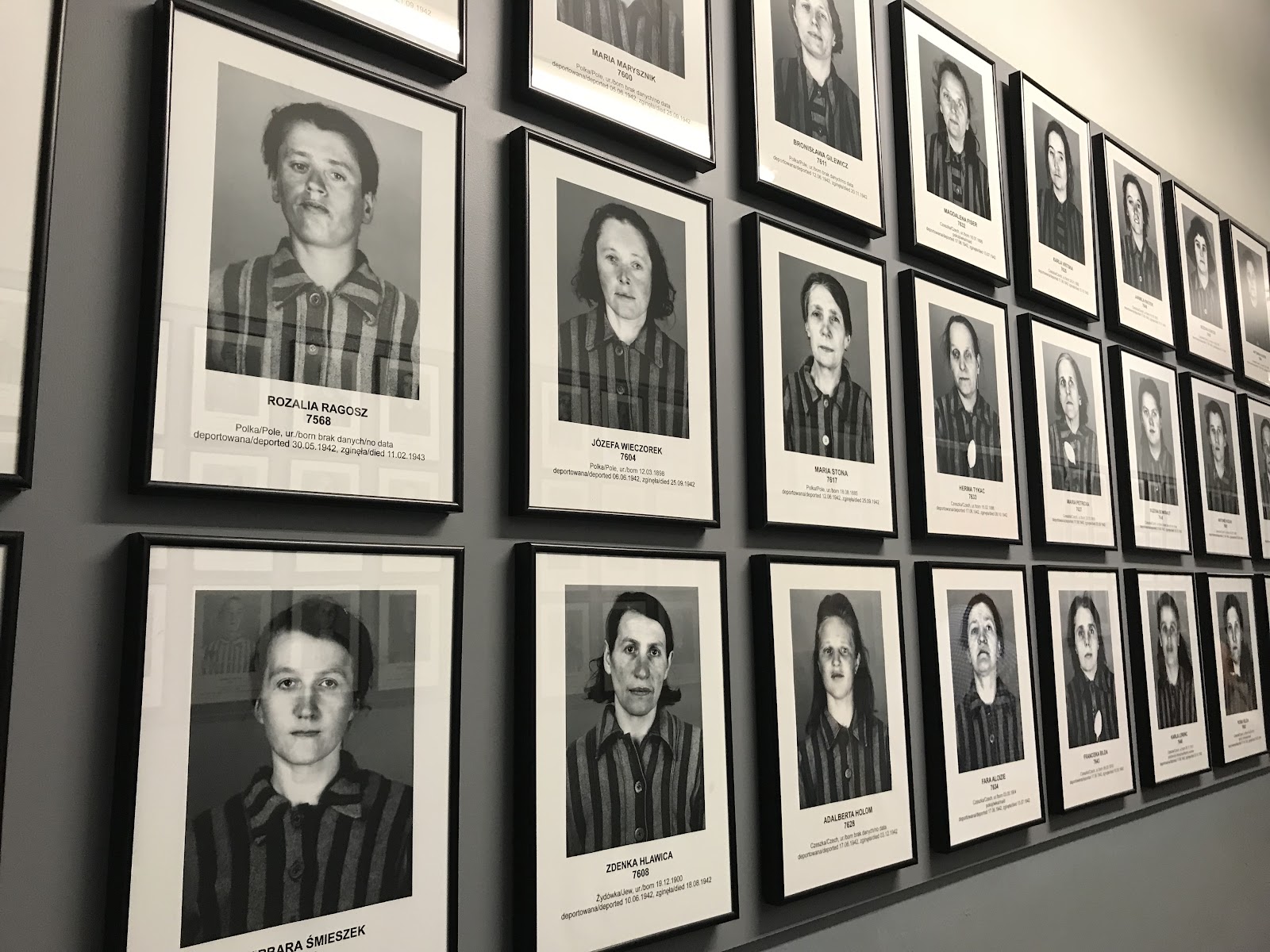 A Hall of Remembrance to commemorate the innocent Jewish lives that were murdered by an evil regime. 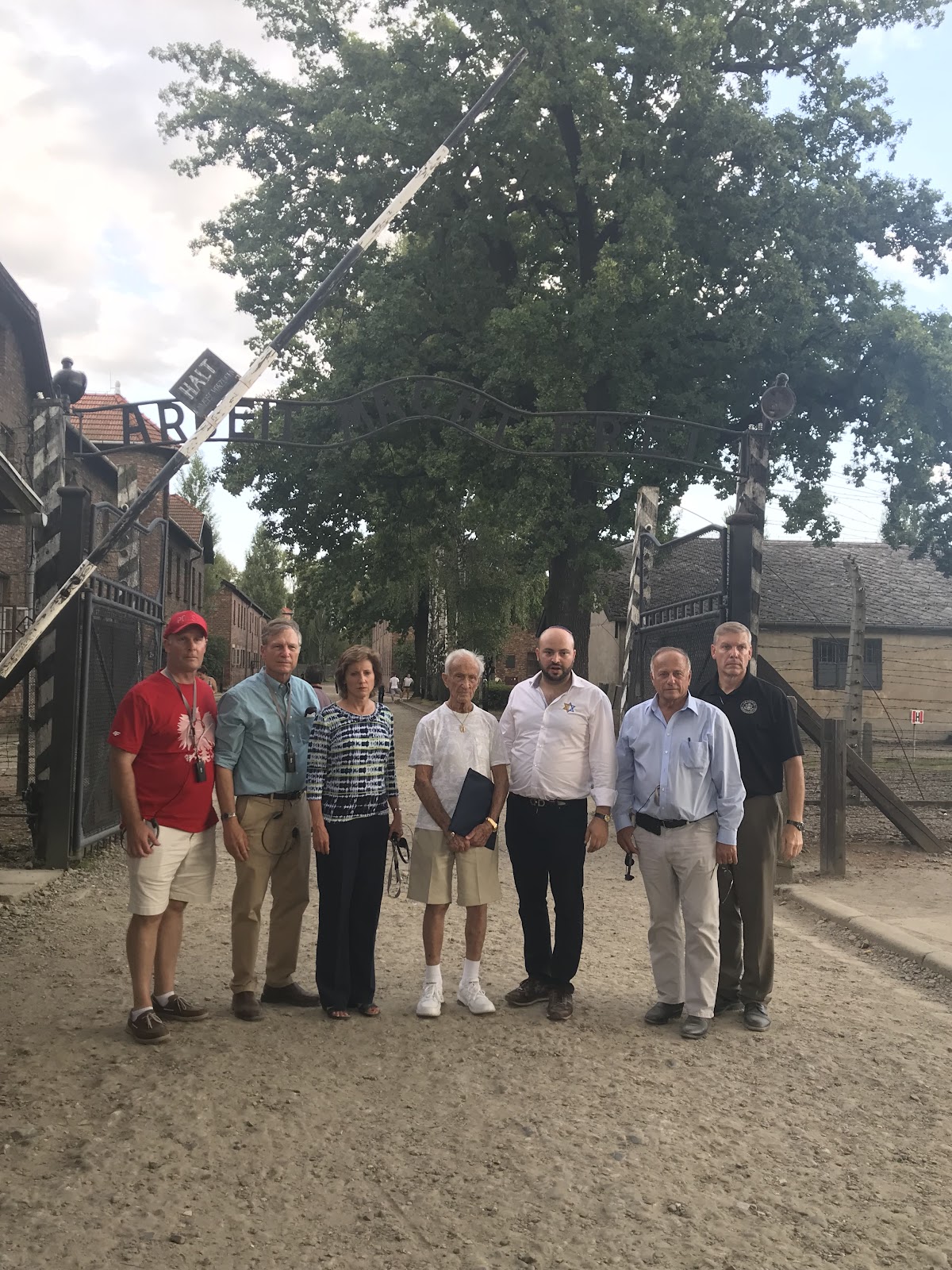 Auschwitz-Birkenau was one of many concentration camps that Nazis designed to provide forced labor for Hitler’s projects and to exterminate Jews, Pols, Russian prisoners of war, gypsies and the many Polish Christians who sheltered endangered Jews. In total, 6 million Jews were killed in Europe during the war. Conservative estimates show that almost half of them, nearly 3 million, were slaughtered in Poland. One person we met while there shared that you cannot go 2 kilometers in Poland without finding the site of a mass grave.  It’s hard to imagine such an injustice, but it happened.

The stories from this dark time were made all the more personal by the meetings I had with individuals who were personally affected by the Holocaust.

I met Edward Mosberg, a 92-year-old Polish-born American citizen who was sent to the Plaszow concentration camp as a boy with his parents and sisters. Edward was the only one in his family to survive, losing a total of 60 relatives to the gas chambers. Edward’s wife, who was sent to Auschwitz, was the only one in her family (besides her father) to survive the camp and two brutal death marches. Edward and his wife eventually moved to America, established a business, raised three children and now enjoy seven grandchildren. They represent the best of humanity in their determination to survive as they share their story and carry on despite the trials they have endured. 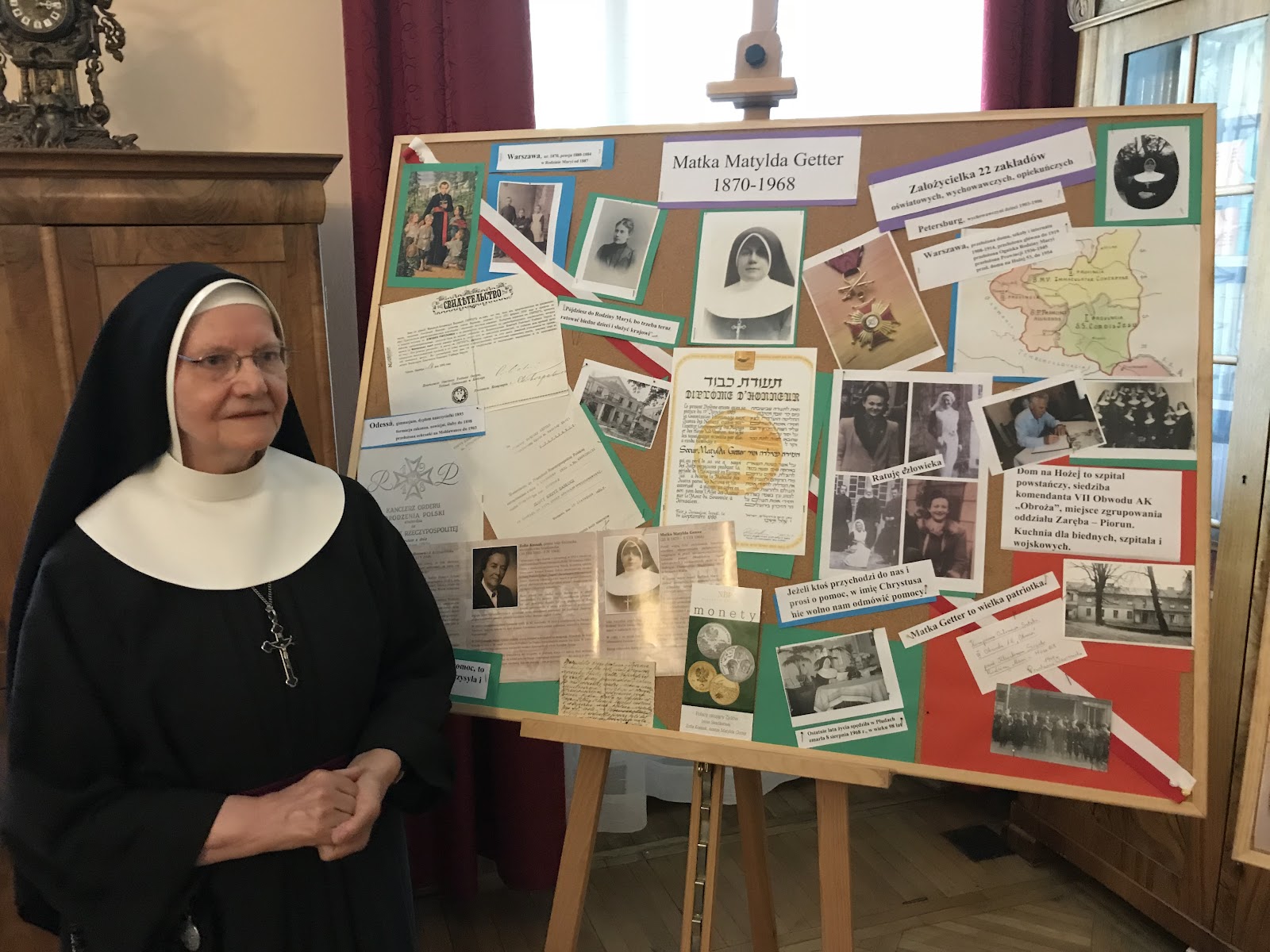 I also visited Sister Franciszkanki (pictured above), who belongs to a Warsaw convent which saved over 500 children during the War. Parents smuggled their children out of a Jewish ghetto into the convent, where the nuns connected them to an underground system where they escaped out of Poland. In addition, I met Julian Kulski, son of the Mayor of Warsaw during the German occupation, who helped forge thousands of documents for Jews so they could safely escape the country. He risked his life, and the life of his family, so others might live. 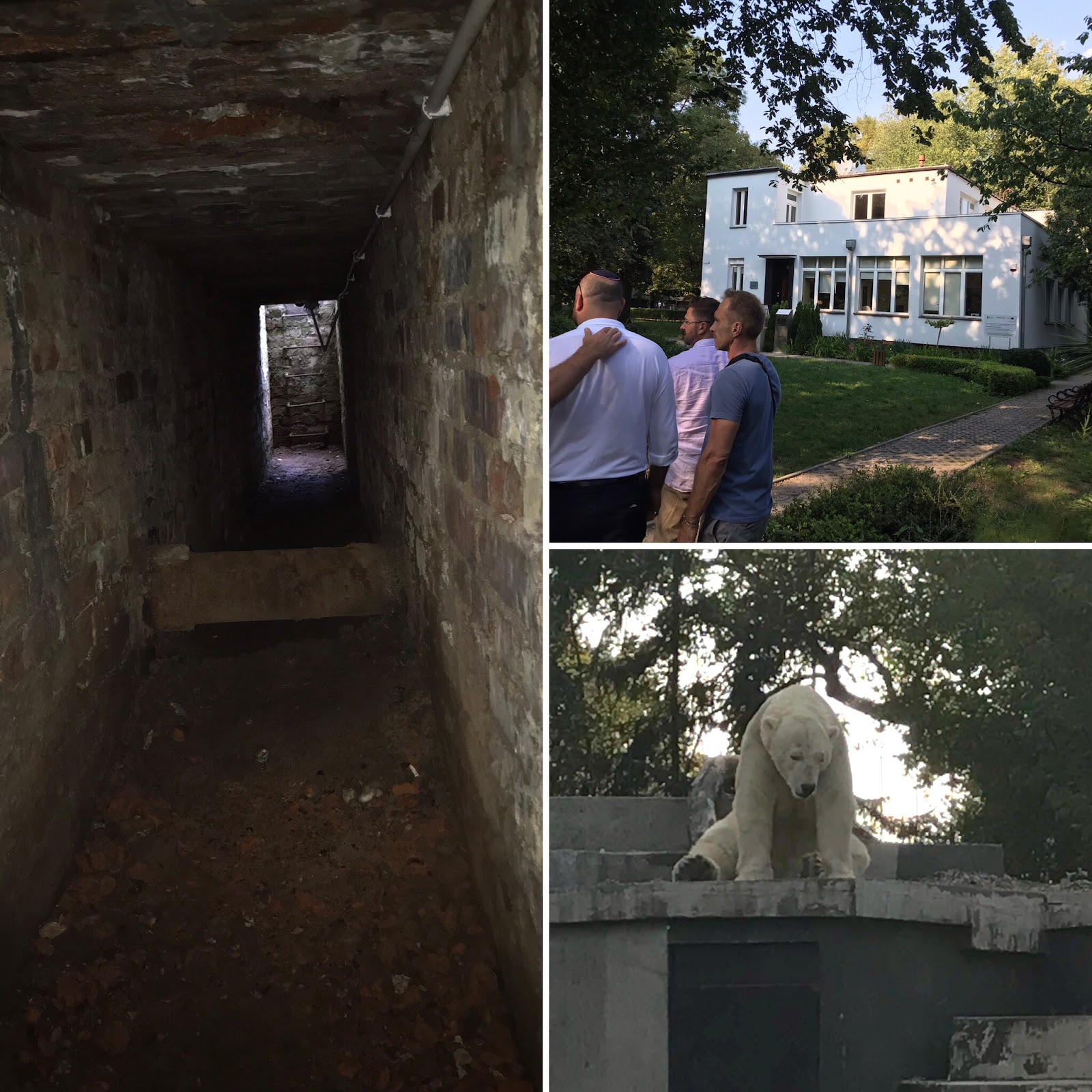 The Warsaw Zoo, where over 300 Jews were saved during the war. The secret tunnel (above) connected to the house basement with a nearby bird cage so children could escape during Nazi raids on the house. They were never discovered.

I also heard the story of Jan and Antonina Zabinski, a couple who directed the Warsaw Zoo and saved hundreds of Jewish citizens by hiding them in their home and the zoo itself and then getting them to safety outside of Poland. They were raided by Nazis many times, never caught, and successfully rescued many. Their story is the basis for the 2017 movie, “The Zookeeper’s Wife.”

Individuals like the nuns, the Warsaw Mayor’s son, and the Zabinskis are called “the righteous” in Poland now. They are an example of the best in humanity. They risked their lives to protect others - the purest example of the Golden Rule.

The witnessing of their memory and the rebirth of their nation, Poland, was inspiring to see. The countryside is beautiful, their military is strong, and its leadership is committed to democracy, free enterprise, and investing in national defense. The nation’s businesses are growing, the economy is thriving, and the people are charting a new course for their nation based on freedom, capitalism, and education. Poland is one of our closest allies and a strong example of what can happen when a resilient people dedicates itself to a renewal of freedom, respect, and appreciation for all its citizens.

I am thankful for the opportunity to experience this rebirth of a nation and strengthen relationships with military and civilians of this most important ally to the United States. I look forward to a continued strong partnership with this important nation.