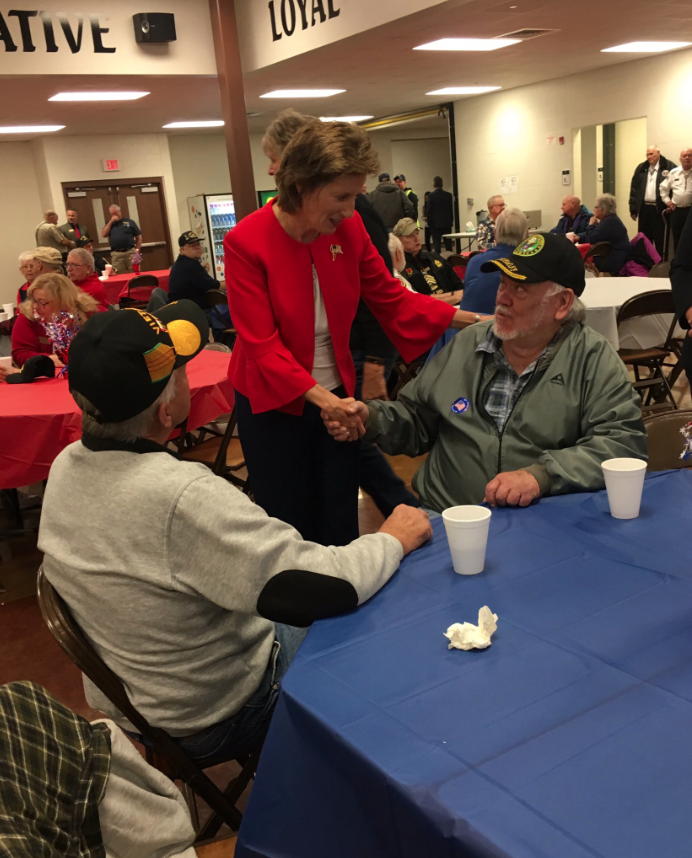 I had a wonderful time talking with and thanking veterans at Smith-Cotton High School last weekend.

As the nation prepared to mark Veterans Day and the 100th anniversary of the end of World War I, I had the distinct pleasure of meeting and speaking with a group of veterans from our very own Centralia. About two dozen veterans – most of them from the Vietnam War - attended the meeting, and each of them shared their stories. It was an honor to thank them for their service and welcome them home! We had a good discussion on health care.They raised concerns about VA benefits, and some worried about how long it takes some veterans to be treated. Many expressed accolades for the good care they’ve received at the Truman VA Hospital, which was good to hear. My goal is to ensure each of our veterans receives his or her promised access to care. I encourage any veteran who believes there has been an undue delay in scheduling a medical appointment with the VA to contact my caseworker Janna Worsham, who works in my Columbia office, at 573-442-9311. 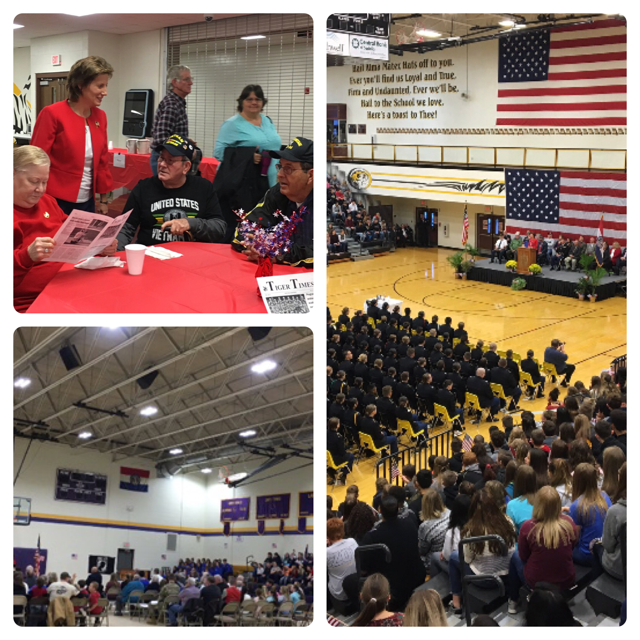 It was an honor to speak at the Veterans Day events hosted by Smith-Cotton High School and Green Ridge High School.

As part of Veterans Day ceremonies throughout our district, I also had the honor of speaking at Green Ridge High School’s Veterans Ceremony, as well as the Veterans Ceremony at Smith-Cotton High School in Sedalia. Both events were amazing! They were well-attended by students and veterans and included patriotic music by the students, a POW/MIA ceremony, flags and standing ovations for our nation’s warriors. In my comments I thanked the veterans for all they have done to keep our country free, reminded our students that the freedoms we enjoy were hard-earned, and encouraged our young people to make the time to thank a veteran. I am so grateful for our heroes’ willingness to embrace duty, display courage, and make sacrifices for each of us. 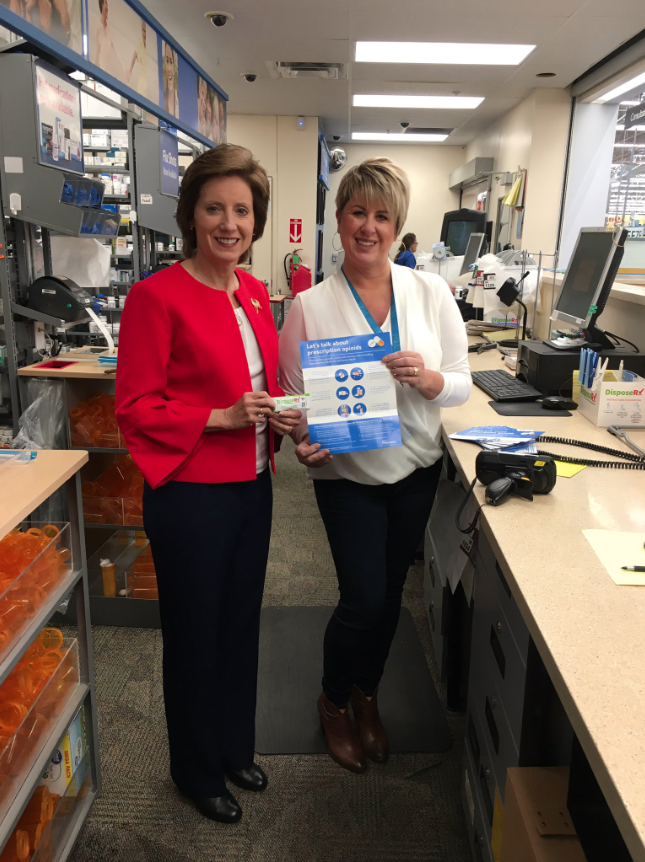 A big thank you to Butler Walmart for letting me stop by to learn how their pharmacy is doing its part to end the opioid crisis.

The opioid epidemic is moving through our country with a fury. Therefore, it is incumbent upon us to do everything we can to stop addiction before it begins and educate our friends and family about the dangers of being careless with painkillers.

I recently met with management and staff at the Walmart pharmacy in Butler to discuss the preventative measures the company is taking to combat opioid addiction. The pharmacy currently includes an educational handout with each opioid prescription, filled with prescription facts and instructions for using painkillers in a way that lowers the chance of addiction. Additionally, Walmart is working to prevent the cycle of medication overdoses and addiction by offering special DisposeRx kits at their pharmacies and on their website. When water and the DisposeRx powder are added to drugs in a prescription vial and shaken, the drugs are dissolved, rendering them unusable.

One of the issues employees raised was the lack of a Prescription Drug Monitoring Program (PDMP) in Missouri. I believe such a program would help prevent drug-shopping. There have been several documented cases of individuals from other states visiting Walmart pharmacies in Missouri to take advantage of the lack of monitoring and load up on prescription drugs, which only fuels the opioid epidemic.

The good news is that, despite the lack of a statewide PDMP, many Missouri pharmacies are able to work with individual counties that have monitoring programs. In this way, the pharmacists are acting as gatekeepers, able to monitor other pharmacies’ dispensing of certain drugs and whether an individual has had multiple prescriptions of the same drug filled in a short timespan. This type of program is just one way we can fight this destructive epidemic. 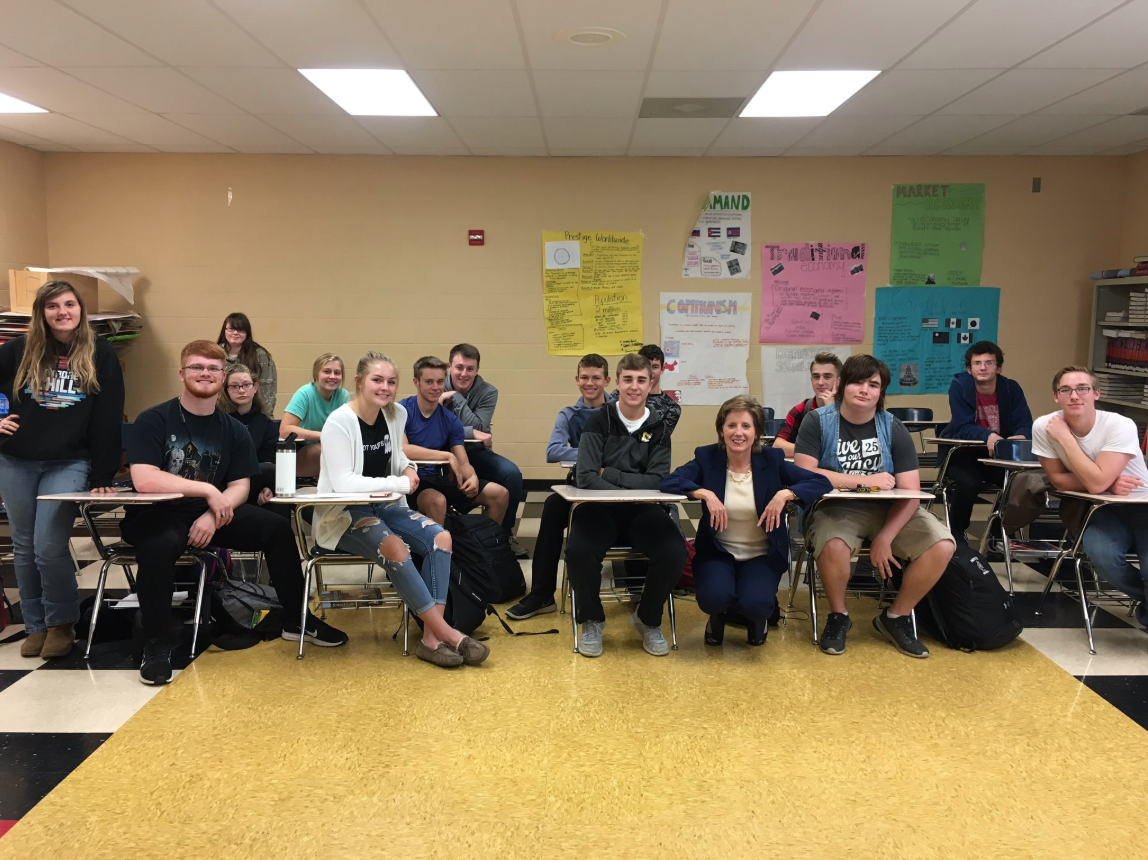 I had the pleasure of speaking with the Fayette High School government class about the federal government and listening to their concerns. 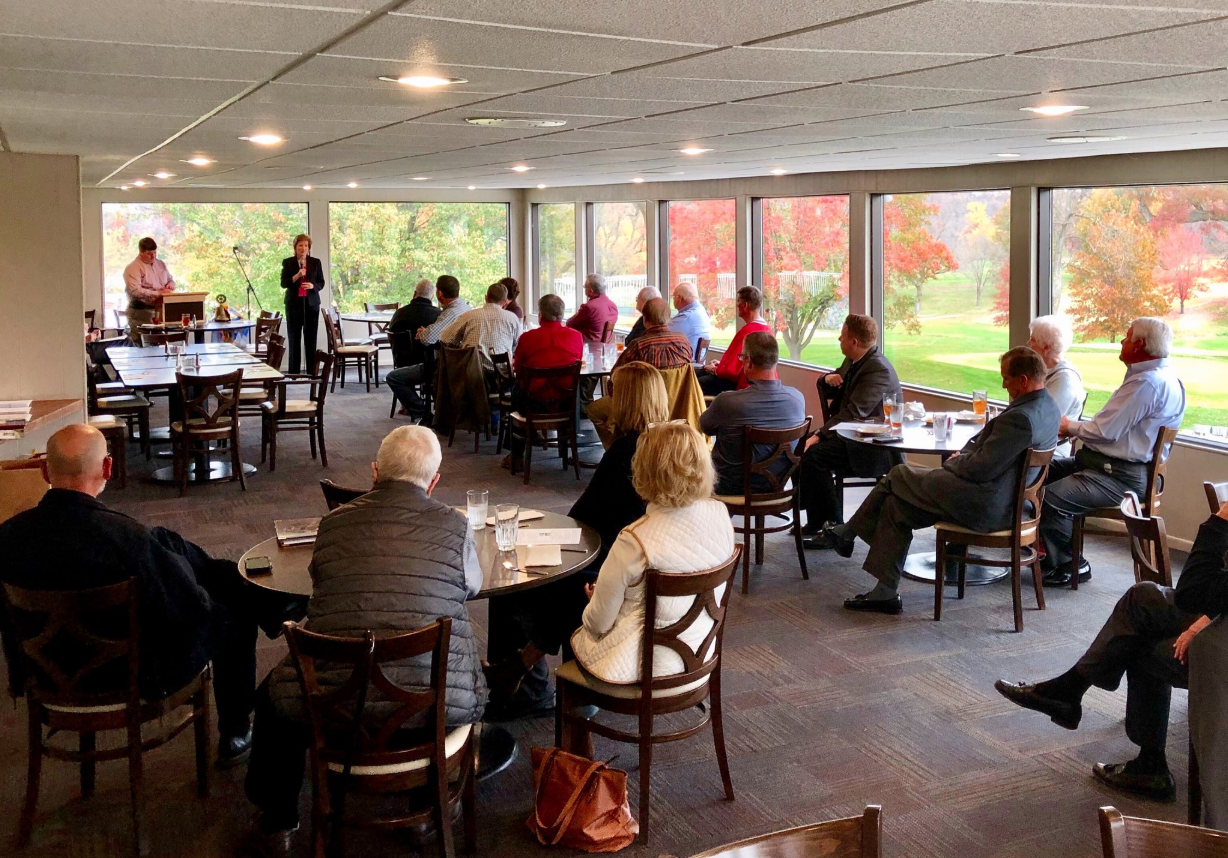 I was thankful for the opportunity to share with the Rotary Club in Mexico the initiatives we’re working on in Washington to improve their everyday lives. 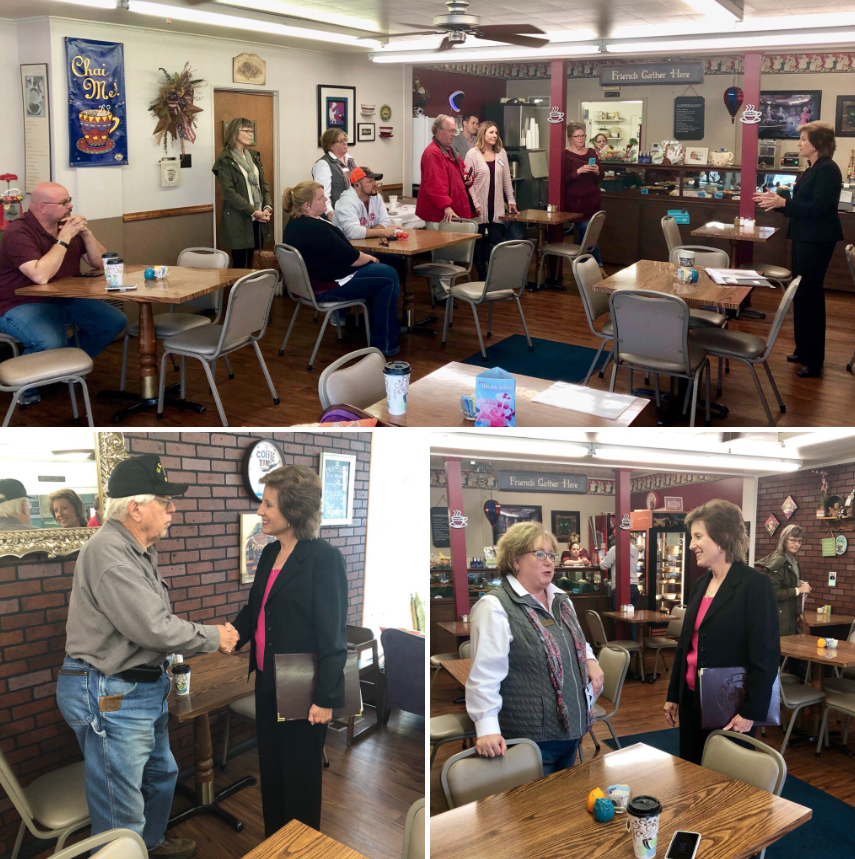 That same day, I stopped at Law-te’ Coffee House to discuss with folks in Moberly how the policies we’ve been working on in Washington have left them better off now. 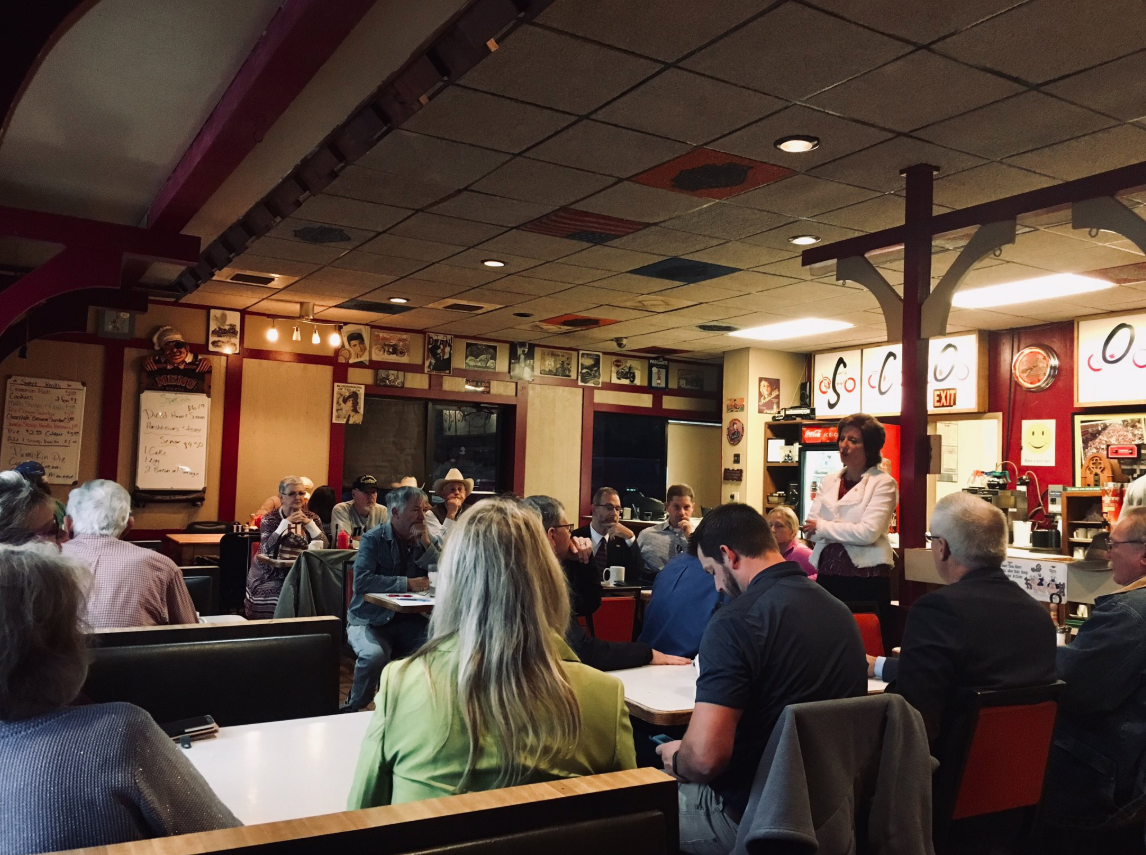 I appreciated everyone who joined me at Scooters in El Dorado Springs last week. We had a lot of good discussion about the needs in Missouri’s Fourth District, especially the necessity of high-speed internet. We have to continue expanding broadband to our rural communities so our students and families don’t fall behind in the digital divide. 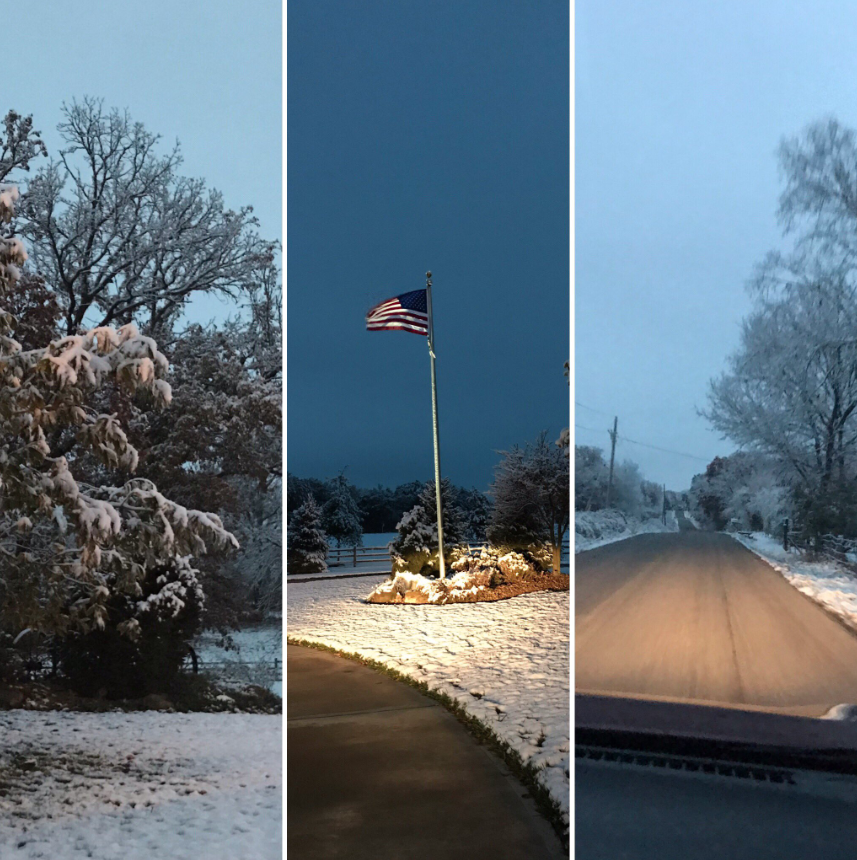 On Veterans Day weekend I had an early wake-up call to speak at two Veterans Day school assemblies. As I drove, I enjoyed the beautiful snowfall from the night before as I reflected on how grateful I was to honor our local heroes for their service to our nation. 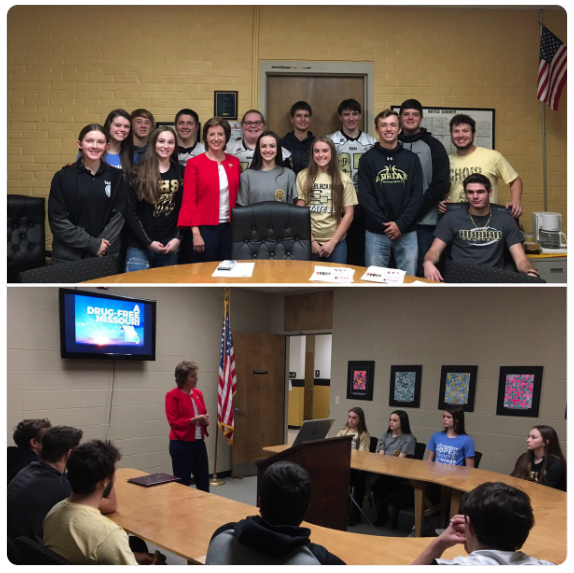 I had a great conversation with a wonderful group of Adrian High School students about the opioid crisis and how we can work to achieve a Drug Free Missouri. 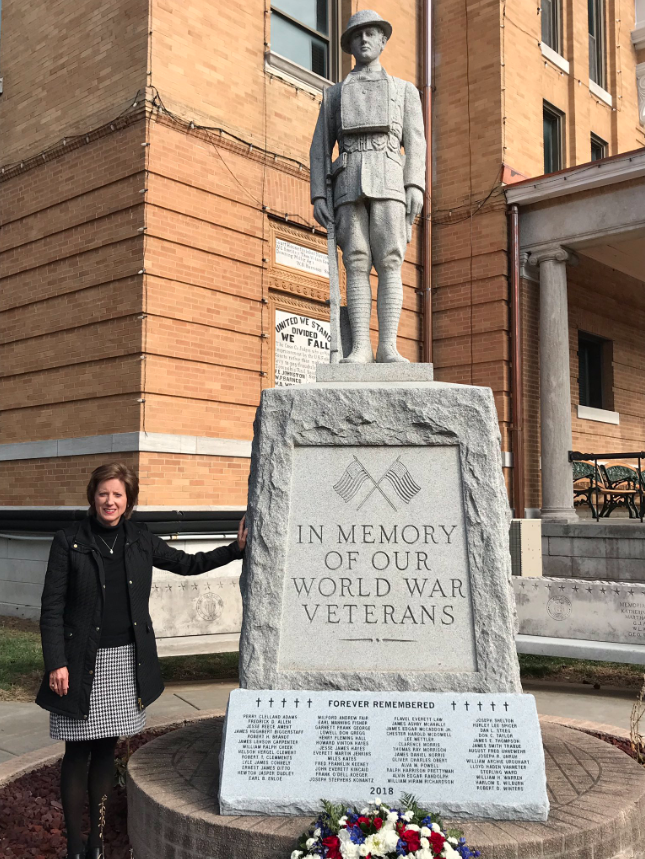 After church on Sunday, I stopped by our doughboy statue at the Harrisonville courthouse to remember the 53 Cass Countians who gave their lives during WWI and to commemorate the 100th Anniversary of the end of this war. It was a sober reminder that freedom isn’t free, and I am grateful for all who went. 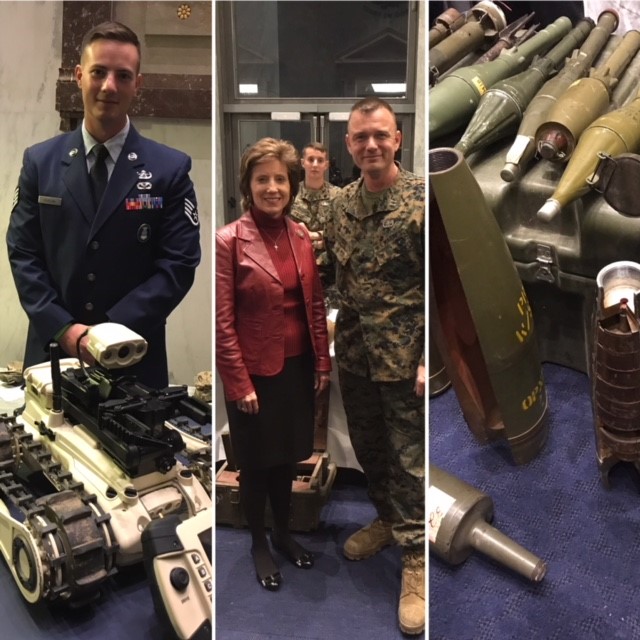 I was sobered & grateful to visit with Explosive Ordinance Disposal (EOD) specialists at the EOD Day on the Hill event. These courageous warriors protect their fellow soldiers by taking out improvised explosive devices (IED’s) that maim and kill, and I am thankful for their service.

The economy is still booming. The October job report was stellar, with the unemployment rate remaining steady at 3.7 percent – the lowest  level since December, 1969 – while 250,000 jobs were created in the same month. In addition to the job creation and low jobless rate, workers’ hourly earnings growth was at its highest since April 2009. Also, the prime-age labor force participation rate surged from 81.8 percent to 82.3 percent, the highest rate since May 2010. Make no mistake: policies we have fought for in Washington have given our citizens the confidence they need as they look for new jobs or seek better, higher paying jobs. Our policies have made our country a better place and that’s something we can all be thankful for this Thanksgiving season!