VICKY'S VIEW: Out and About 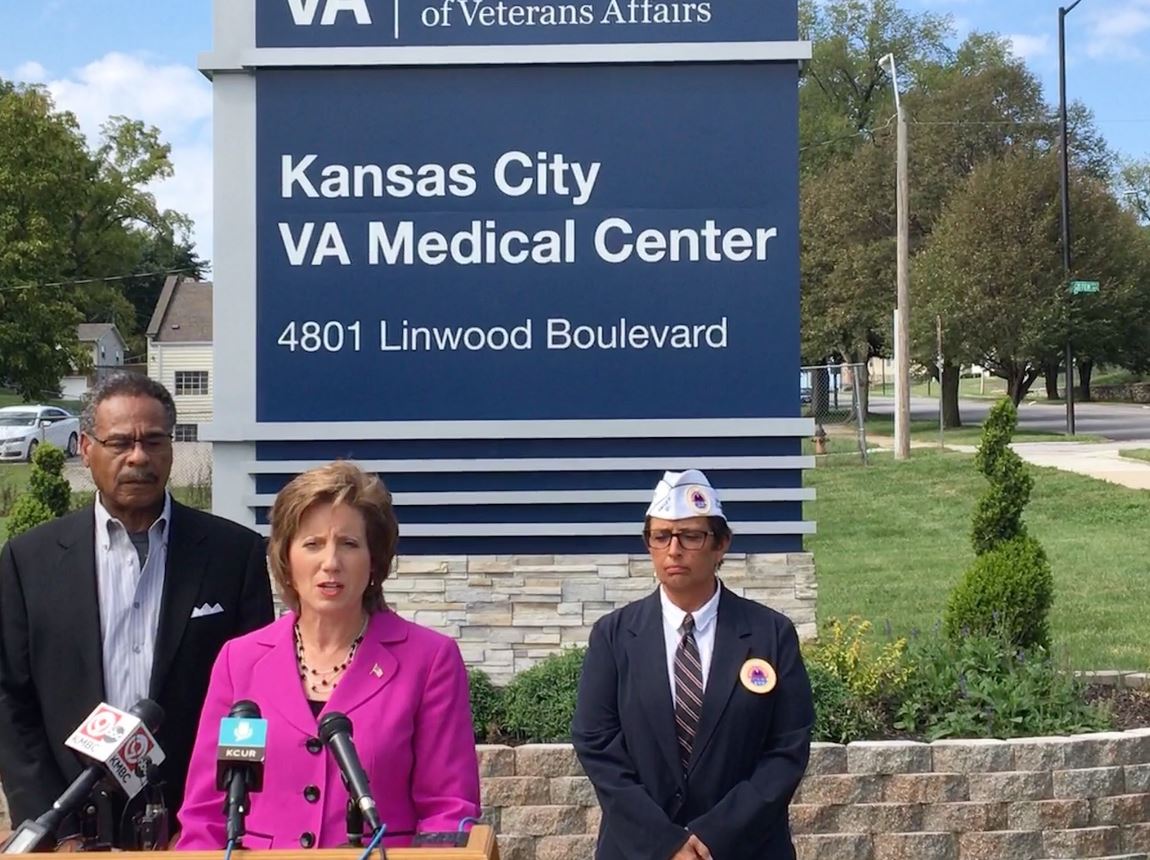 Congressman Cleaver, local stakeholders, and I held a press conference after the roundtable I hosted at the Kansas City VA.

On Tuesday, I hosted a roundtable with Kansas City VA Medical Center staff, local stakeholders, Congressman Emanuel Cleaver II, and Congressman Kevin Yoder to discuss ways our VA medical centers and clinics can better address the issues our local vets face. We discussed the perception of over-prescribing medication and whether there was a link to the opioid epidemic, the difficulty in reaching a VA staff member when calling the VA, the flexibility in PTSD counseling programs, and how some small hospitals are bearing the cost of ambulance transportation to the VA hospital if a veteran enters their emergency room.

I was very encouraged by the VA’s response. They shared how they have been focusing on reducing the the number of prescriptions they write, going from 11,218 prescriptions in 2008 to 4,505 so far in 2018. They also set up a Pain Clinic where veterans are offered options other than opioids to manage their pain such as chiropractic care, acupuncture, cognitive behavioral therapy, physical therapy, and other programs, like initiatives to address insomnia, weight loss, tobacco cessation, and substance abuse. These initiatives are bearing positive results and many veterans are finding help.

After hearing our concerns about the phone wait time at the VA, the center also hired 10 additional nurses to man their call center. This move reduced call wait time from over 4 minutes to a little over 1 minute. We also learned that veterans have a choice of which PTSD program they want to participate in and no one is forced out of a preferred program.  Lastly, the staff at the Kansas City VA shared their view that the law needs more clarification regarding the reimbursement of local hospitals for ambulance transportation when they transfer a veteran to a VA hospital.  I am going to work with them on finding a legislative solution so no veteran or local hospital is charged for this type of ambulance service.

I appreciate my colleagues working with me on these important issues. I also appreciate the Kansas City VA Medical Center for meeting with us and expressing such concern and responsiveness to the issues we raised. Clearly, they have the best interest of our veterans at heart; I commend them for their dedicated work. 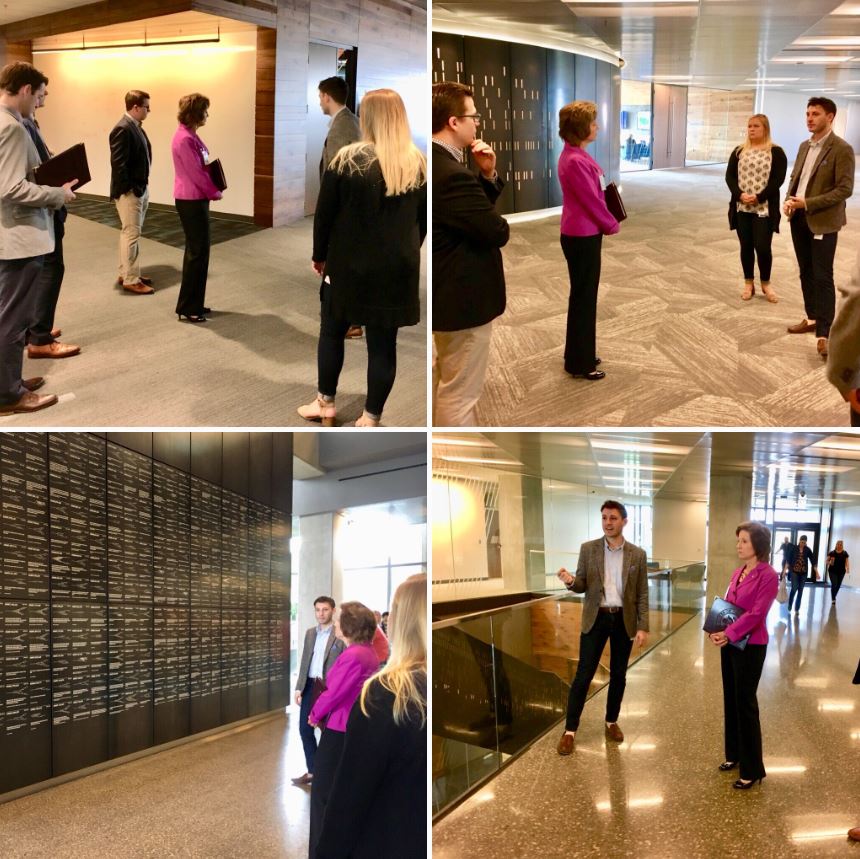 I got to learn firsthand what’s going on at the new Cerner Corporation Innovations Campus in Kansas City.

For many years, Congress has invested millions of dollars in the Veterans Administration to develop a new computer system that “talks” between the agency departments. Unfortunately, the VA was not successful. A few years ago, the project contract was instead offered to a private company.  Cerner Corporation, based in Kansas City, won the bid and is working on the new system.  A pilot was launched in four facilities this past year and the hope is that the entire system will be converted over to a seamless system between the DOD medical clinics and the VA over the next 10 years.

I was interested to see the new headquarters of the Innovation Campus and to hear an update on this important work. The new system cannot be implemented soon enough - our veterans deserve this quality service, not an archaic system that doesn't meet their needs. 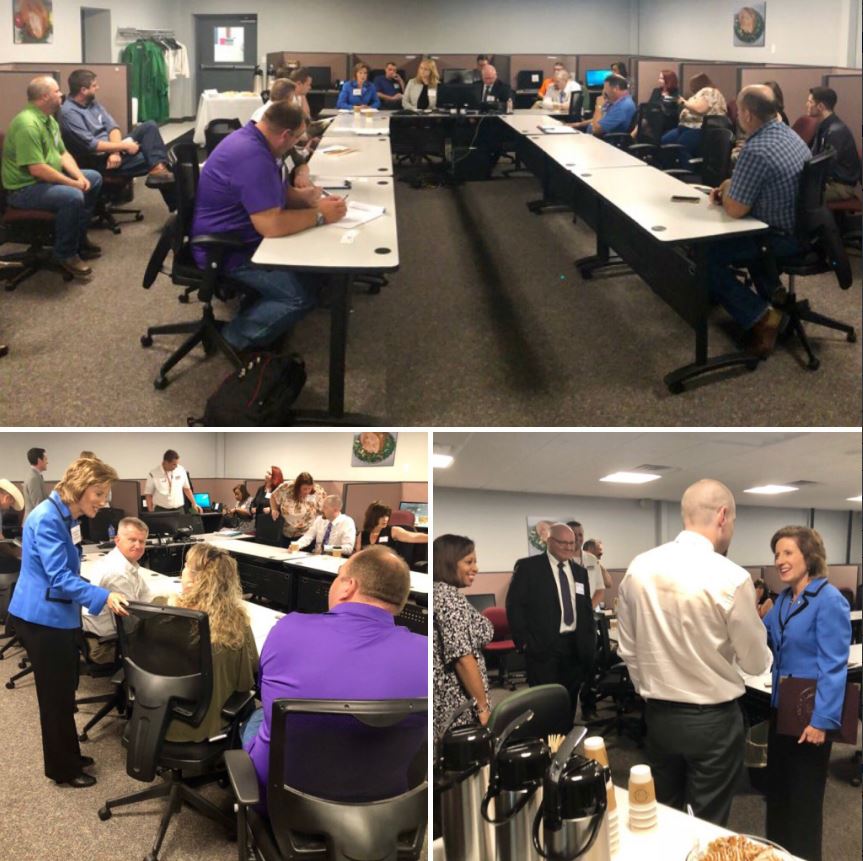 On Wednesday, I had a great Roundtable at Smokehouse Meats with U.S. Department of Agriculture Food Safety and Inspection Service (FSIS) officials and local meat processors in Missouri’s Fourth District to address concerns our local processors are facing.  I was pleased with the initiative and the hearts of the FSIS officials who wanted feedback on how they are doing and how they can do better.  We need more government agencies interested in coming out and listening to the people they serve! 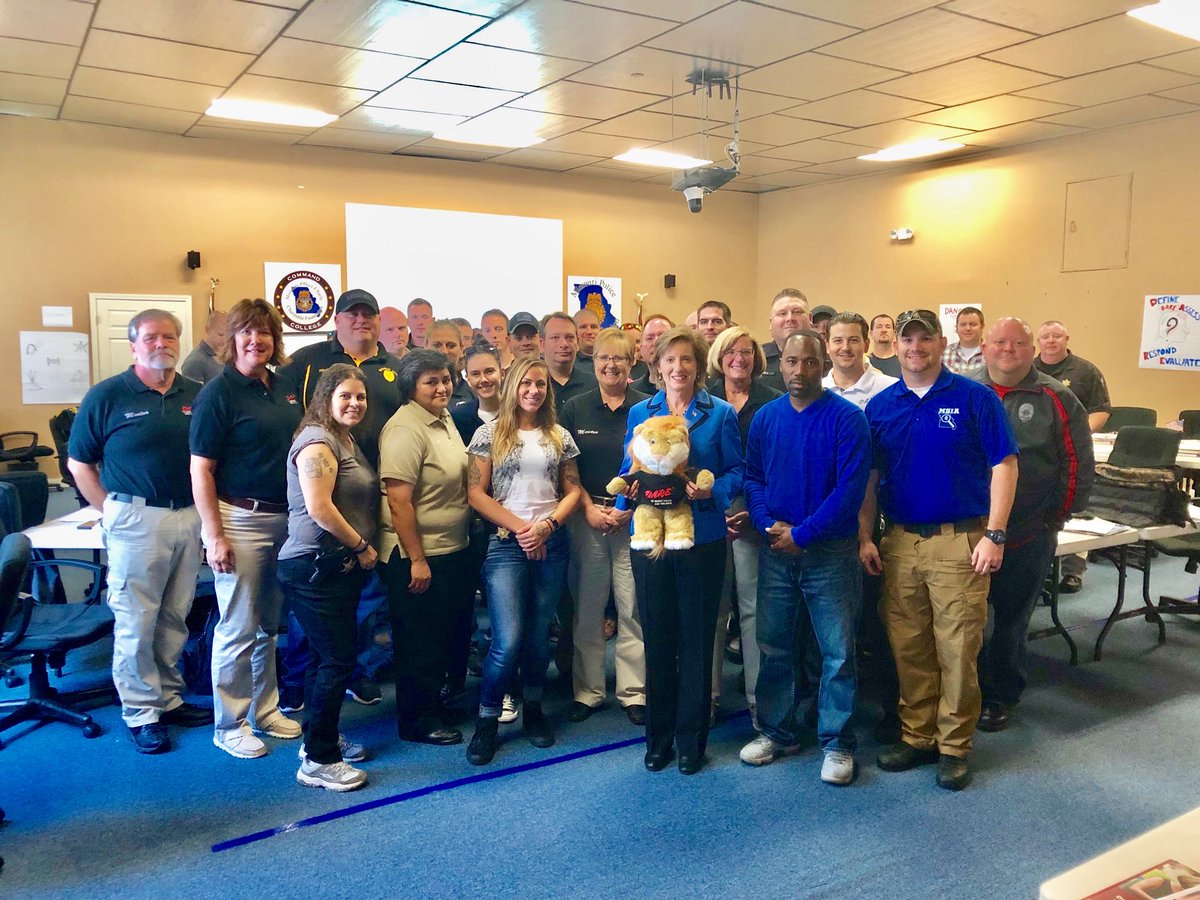 Later on I visited the Missouri Police Chiefs to observe their training for the new D.A.R.E. program.

I stopped by the Missouri Police Chiefs office Wednesday to learn about the new and improved D.A.R.E. curriculum that law enforcement officers across Missouri are preparing to roll out. I was excited to see there is now going to be a new high school curriculum, which I have been advocating for ever since I talked to several high school groups who mentioned the need.  Now D.A.R.E. will feature three levels of programming (K-4, Middle School, and High School) with a different focus at each level.  I appreciate the dedicated law enforcement officers who have a heart for young people and are willing to go through this comprehensive two-week training. These officers make such a big difference in youths’ lives and serve as wonderful role models. They presented me with "Darin" the Lion, the official D.A.R.E. mascot, for my supporting and helping young people live drug-free.  I look forward to taking Darin to Washington with me! 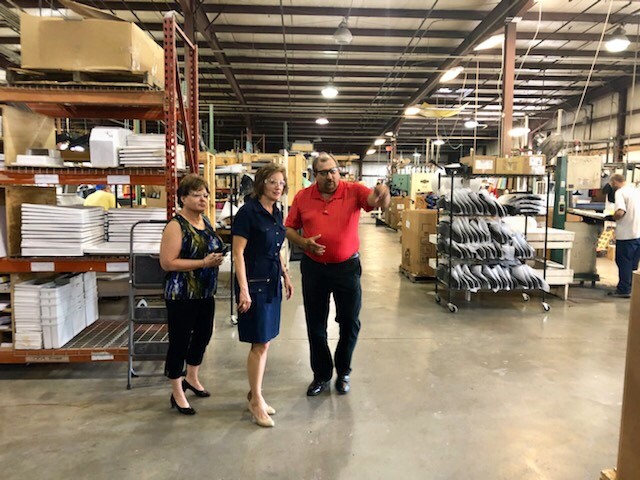 On Thursday I had the opportunity to tour Marine Electrical Products, a custom wire harness manufacturer and plastics forming facility in Lebanon which produces the consoles for Tracker boats - another great manufacturer right here in Missouri’s Fourth District! They employ over 300 people and make a great product! 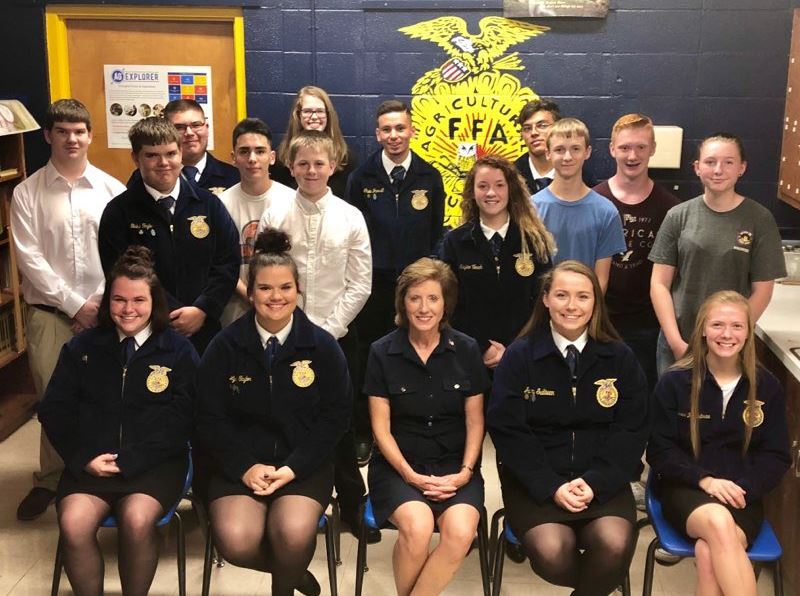 It was so much fun to visit with Future Farmers of America, Future Business Leaders of America, and Family, Career and Community Leaders of America students at Golden City High School in the afternoon on Thursday. These young people are leading the way in their school and their community. Our future is in good hands with them at the helm!

The tax reform package we passed into law earlier this year continues to produce great results. Evans Tool & Die, a family-owned toolmaking and stamping business in Conyers, Georgia has always shared profits with employees and given them annual bonuses. Thanks to tax reform, those bonuses are going to increase. The company also says it is heading towards a strong year and as a result, it plans to hire more employees. According to Dee Barnes, President and CEO of Evans Tool & Die: “We’re ready to grow, buy another stamping press, buy new equipment. In recent years, we haven’t been able to invest heavily into new equipment but now tax reform has definitely made it a good time to invest.”

If you would like to share how your business is benefitting from tax reform, please let me know here and I’ll be happy to add your good news to this newsletter.

America’s job market just keeps improving. The Bureau of Labor Statistics recently showed a spike in job openings, sending the number soaring to 6.94 million open jobs across the country. Also, the number of open jobs has exceeded the number of unemployed people every month since March - that hasn’t happened since 2000. Another interesting nugget of good news: the number of Americans voluntarily quitting their jobs reached its highest level on record, an indicator that people feel better positioned to search for new opportunities. To me this sounds like a great situation both for the unemployed and for employed Americans looking for better jobs. 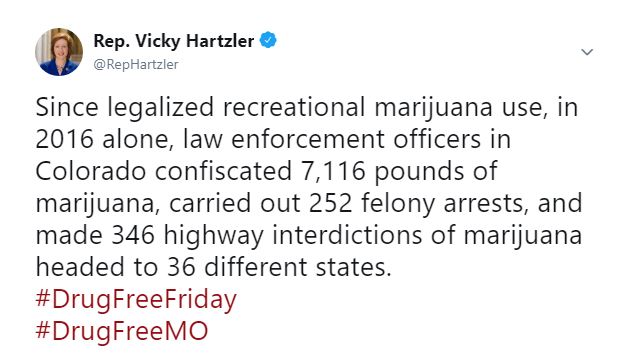