Making it Easier for Veterans to Get the Care they Deserve 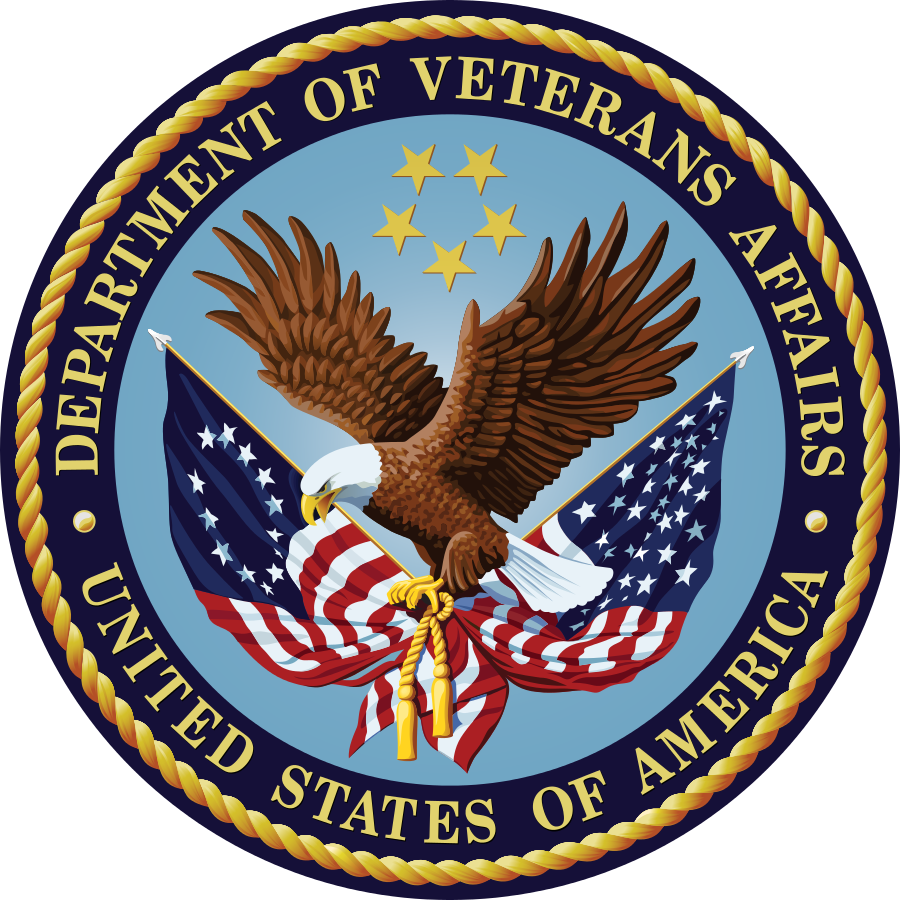 On Wednesday, the House passed a bill to make sweeping improvements to health care provided by the Department of Veterans Affairs (VA)! First, the bill would streamline the VA’s many community health care programs into just one program. While the programs are being consolidated, it would provide continued funding for the Choice Program.

This funding is particularly important in light of Acting VA Secretary Robert Wilkie’s April announcement that the VA Choice Program will run out of funding in early to mid-June, potentially creating another access to care crisis. Passage of this bill will avert this crisis.

Second, the bill would create a non-partisan process for reviewing the VA’s assets to ensure veterans can access the care they have earned. Specifically, it would begin a process of reallocating money from underutilized facilities to facilities that are more heavily used, in order to better serve our veterans.

Congress has worked tirelessly with veterans’ service organizations and the VA to create this bill, and I’m so pleased with what it means for our veterans. It will help veterans access care in their communities, take a close look at the VA’s aging infrastructure so that it can be improved, and help support the heroic efforts of those family members who have, in some cases, left their careers to care for the veterans in their lives.

I look forward to the Senate taking up this piece of important legislation.

On Wednesday, I also had the opportunity to testify at a hearing held by the House Veterans Affairs Committee about changes the VA should make to better provide for veterans. I spoke about persistent understaffing at the Department and how my bill, H.R. 5521, the VA Hiring Enhancement Act, would take a step to remedy the situation.

Specifically, my bill would allow civilian physicians to be released from their private practice non-compete agreements so they can serve in the VA. It would also make the training requirements for VA physicians more rigorous, so that they are held to the same standards as most civilian doctors.

I am hopeful this bill will gain traction after the hearing in which I participated on Wednesday. Please follow me on Facebook or Twitter to find out when there are updates on this bill. 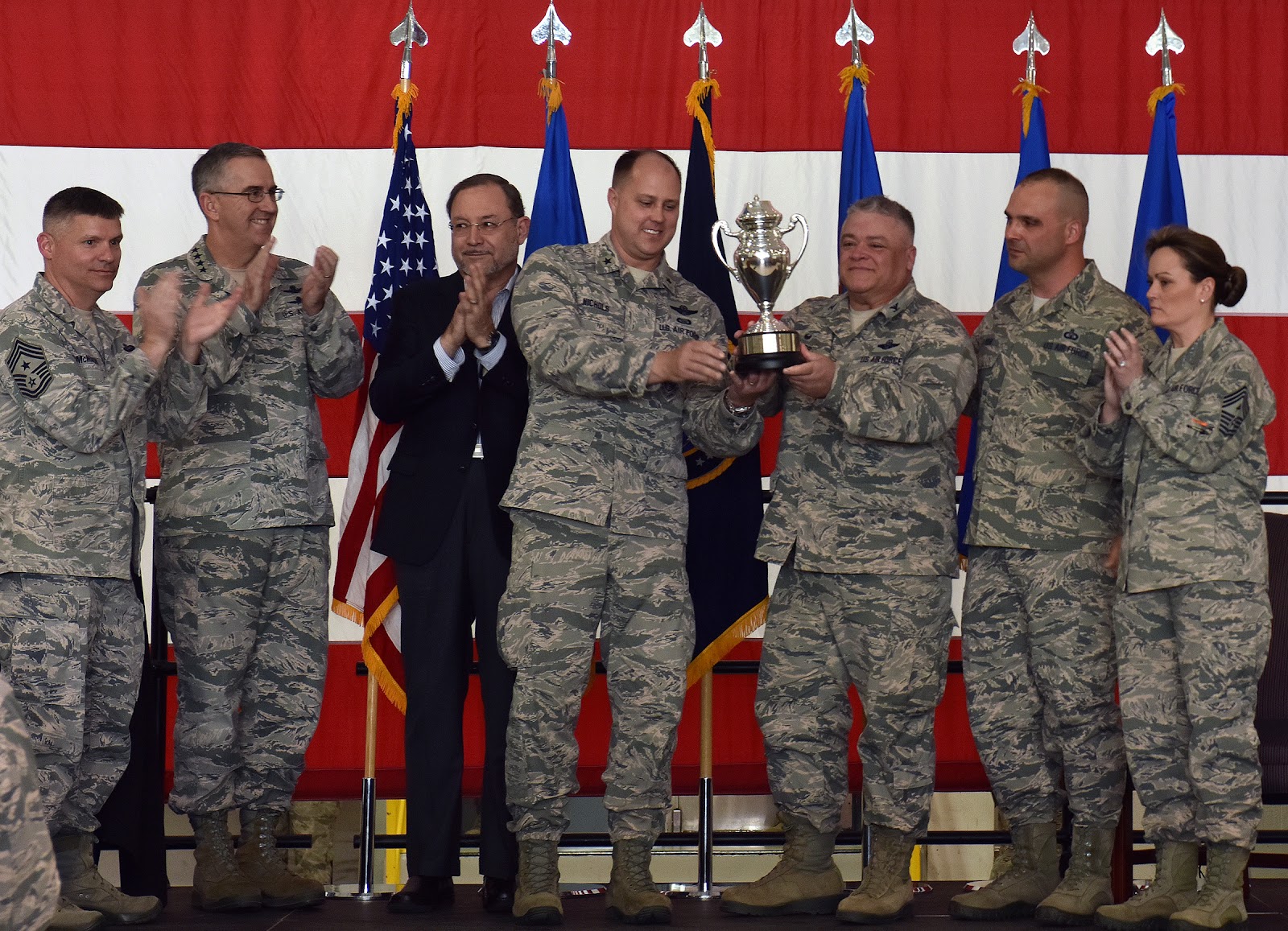 Last week, my staff had the honor and privilege of attending the ceremony for the presentation of the Omaha Trophy to Whiteman Air Force 509th and 131st Bomb Wings. The Omaha Trophy was first presented in 1971.  It is awarded to units for excellence in strategic deterrence and global strike. Whiteman Air Force Base (AFB) won the trophy for executing the best Strategic Bomber Operations of 2017.

General John E. Hyten, Commander, U.S. Strategic Command attended the ceremony and acknowledged the importance of the hard work, day in and day out, of the people he leads -- including those at Whiteman Air Force Base. “You’re being recognized because you’re the best,” Hyten said. “I’m just here to say ‘thanks.’” Steve Martin, former President/CEO of BC/BS Omaha and member of the Strategic Command Consultation Committee, presented the award to the 509th and 131st Bomb Wings.

Congratulations to the Whiteman Air Force Base for receiving this prestigious award!

Honoring Those Who Keep Us Safe 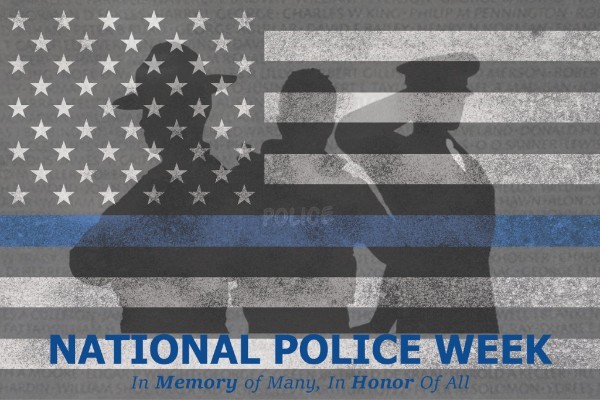 This week we commemorated #NationalPoliceWeek. Law enforcement professionals are often the unsung heroes who put their lives in harm’s way each day to keep our communities safe and they deserve our recognition and appreciation. Sadly, we were reminded of this only this morning when Warsaw Police Chief Jason Wenberg was shot in the chest by an escaping suspect. I am thankful that he’s in stable condition and I am praying for his quick recovery.

This event, and events from earlier this year, impress on our hearts the sober reality of the price of protection and selfless sacrifice.

Earlier this year we lost two Clinton, Missouri Police Officers in the line of duty, Officer Gary Michaels and Officer Christopher Ryan Morton. Two other officers were injured when Officer Morton was killed, Officer Nathan Bettencourt and Officer Nicholas Kasper. These outstanding individuals have dedicated their lives to service in and out of uniform and Officers Morton and Michaels will be forever missed.

Please join me in saying thank you to the brave police officers across Missouri’s Fourth Congressional District and the nation.

Catching Up with Clinton 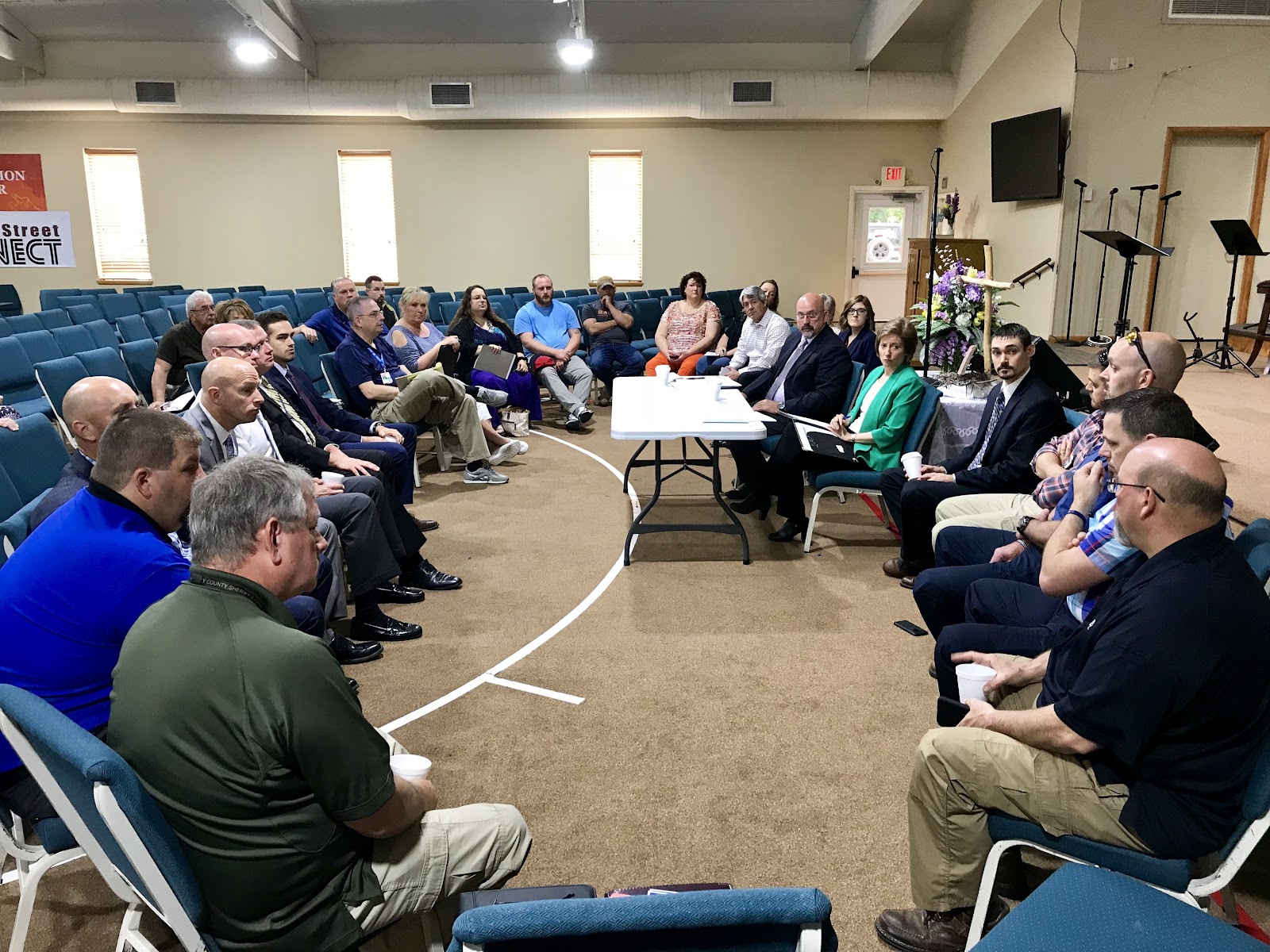 I had a great meeting with community leaders in Clinton to come up with ways to address the opioid epidemic and strive for a drug-free Missouri.

On Monday it was encouraging to sit down with community leaders in Clinton to discuss ways to combat the drug crisis in this area. These leaders decided to do something about it. I am proud of this community for wanting to come together to address this problem that is impacting far too many American communities.

While possible initiatives are in the beginning stages, I am optimistic about the ideas I heard, and I admire the initiative these leaders have taken. I look forward to seeing what they do, and I will help in whatever way I can. 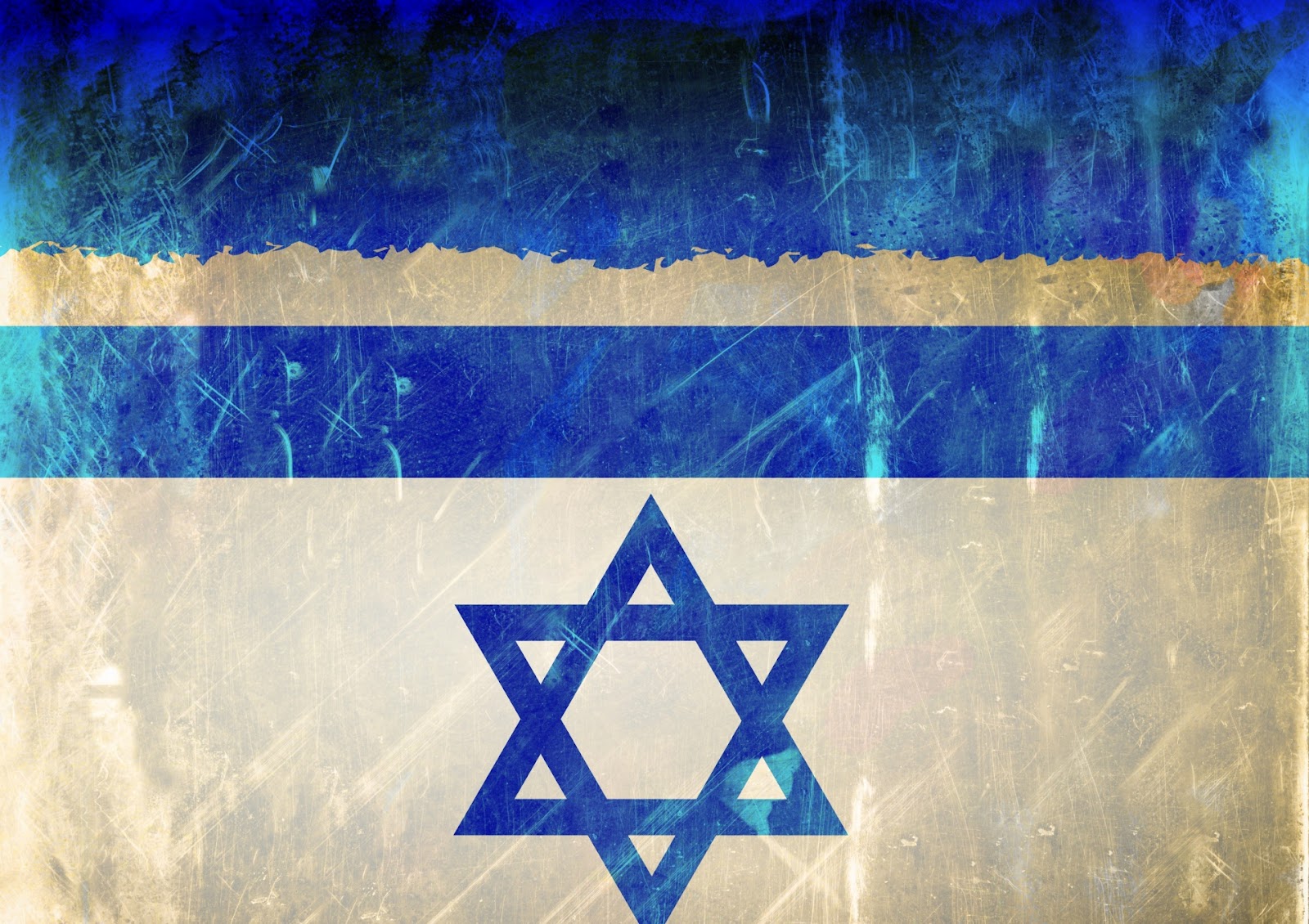 This week, the United States officially opened the new U.S. Embassy in Jerusalem! I have long been a supporter of moving the U.S. Embassy from Tel Aviv to Jerusalem and Monday’s historic event signifies the strong and unwavering U.S. commitment to our friend and ally in the Middle East. It also tells the whole world that we will stand by our allies and refuse to bow to pressure from enemies of an Israeli free state. Previous administrations have promised to take action on this issue, but only President Trump delivered.

The opening of the new embassy also marked the 70th Anniversary of Israel’s Independence Day, when Israel’s first prime minister announced the existence of an independent Jewish State. That same day, President Harry S. Truman simultaneously announced the United States would recognize the new State of Israel. The opening of the U.S. Embassy in Israel’s historic capital is a wonderful way to celebrate these 70 years of friendship.

We have a special partnership with Israel -- the country is our greatest ally in the Middle East and the only democracy in the region. We share the same values regarding individual rights and liberties, and it is essential we stand by them. 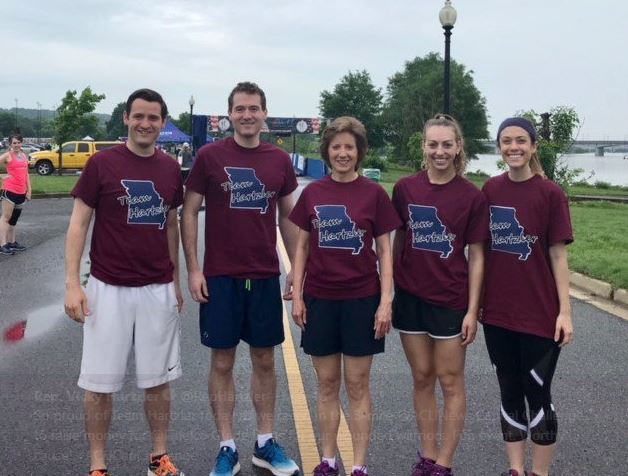 I was so proud of Team Hartzler on Wednesday as we raced in the 3-mile ACLI Capital Challenge to raise money for Fidelco Guide Dogs for our wounded warriors. What a fun event and worthy cause! 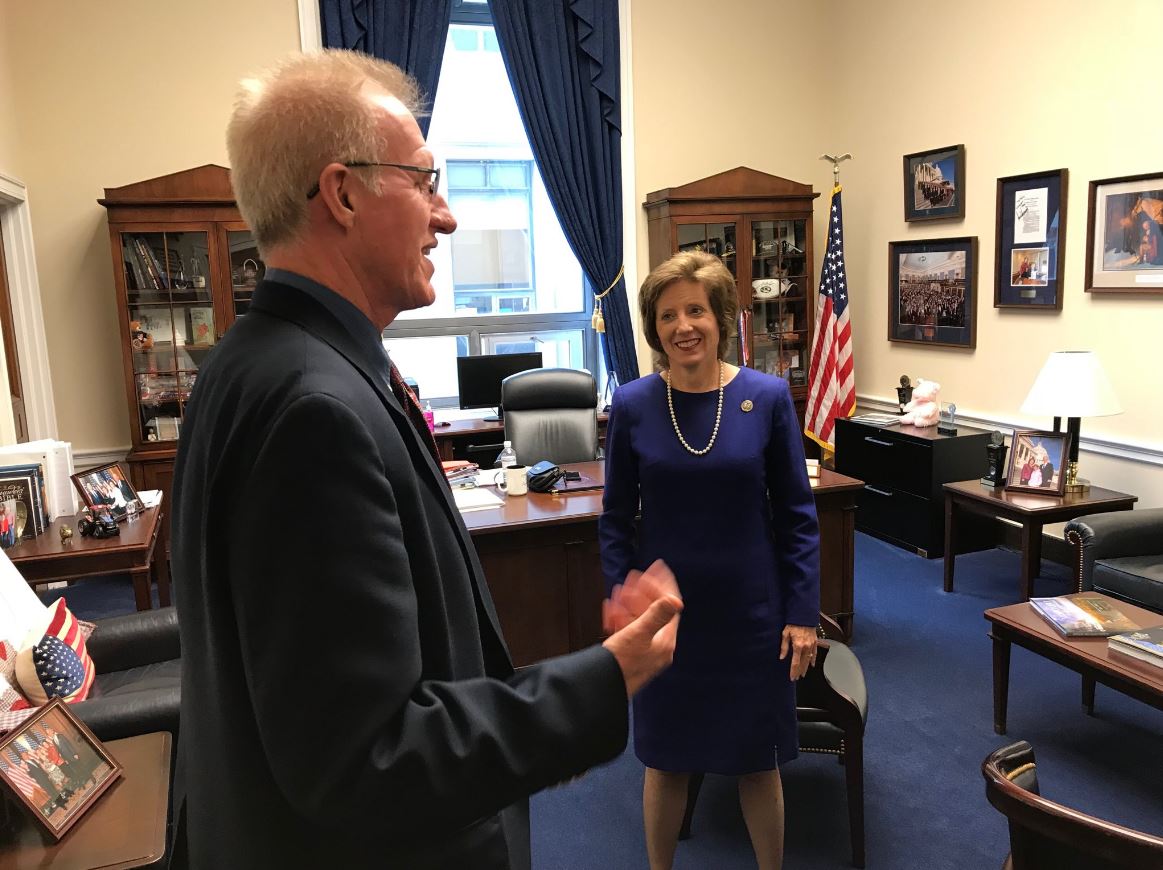 On Wednesday I was glad to speak with Phil Dooley of the National Association of Realtors and hear his views on our nation's tax policy and the issues facing America's homebuyers. Thank you for stopping by! 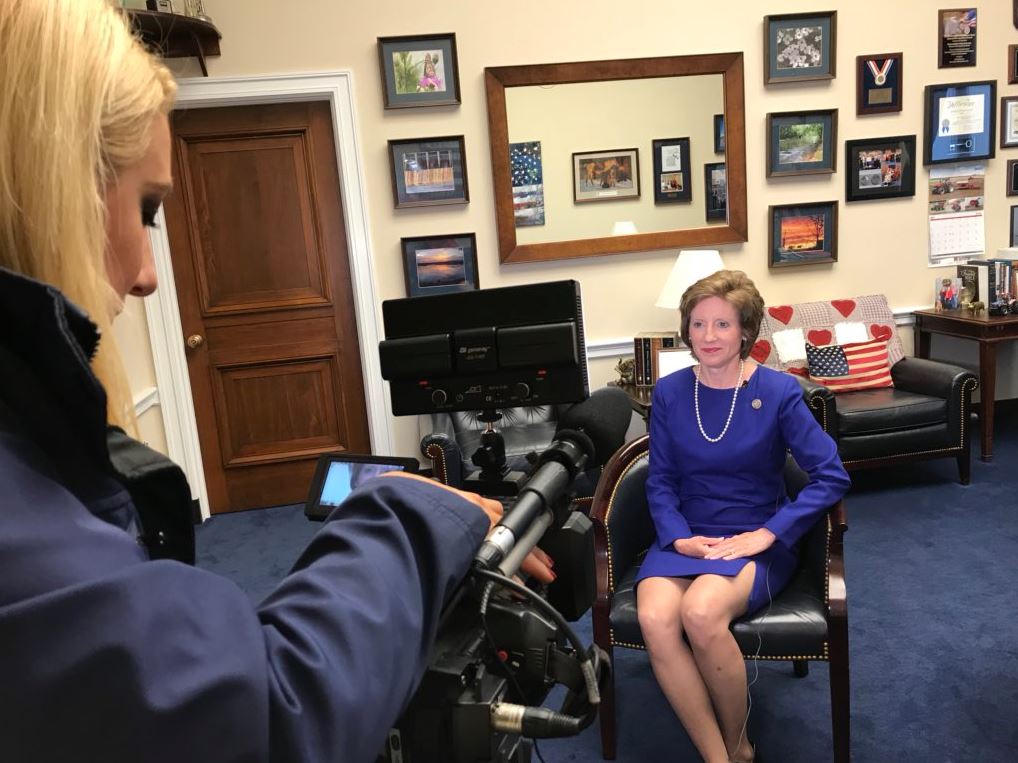 On Thursday I was glad to discuss my legislation, the Police Officers Protecting Children Act, with KOLR10 in Springfield. This bill will allow off-duty and retired police officers to help protect children in school. 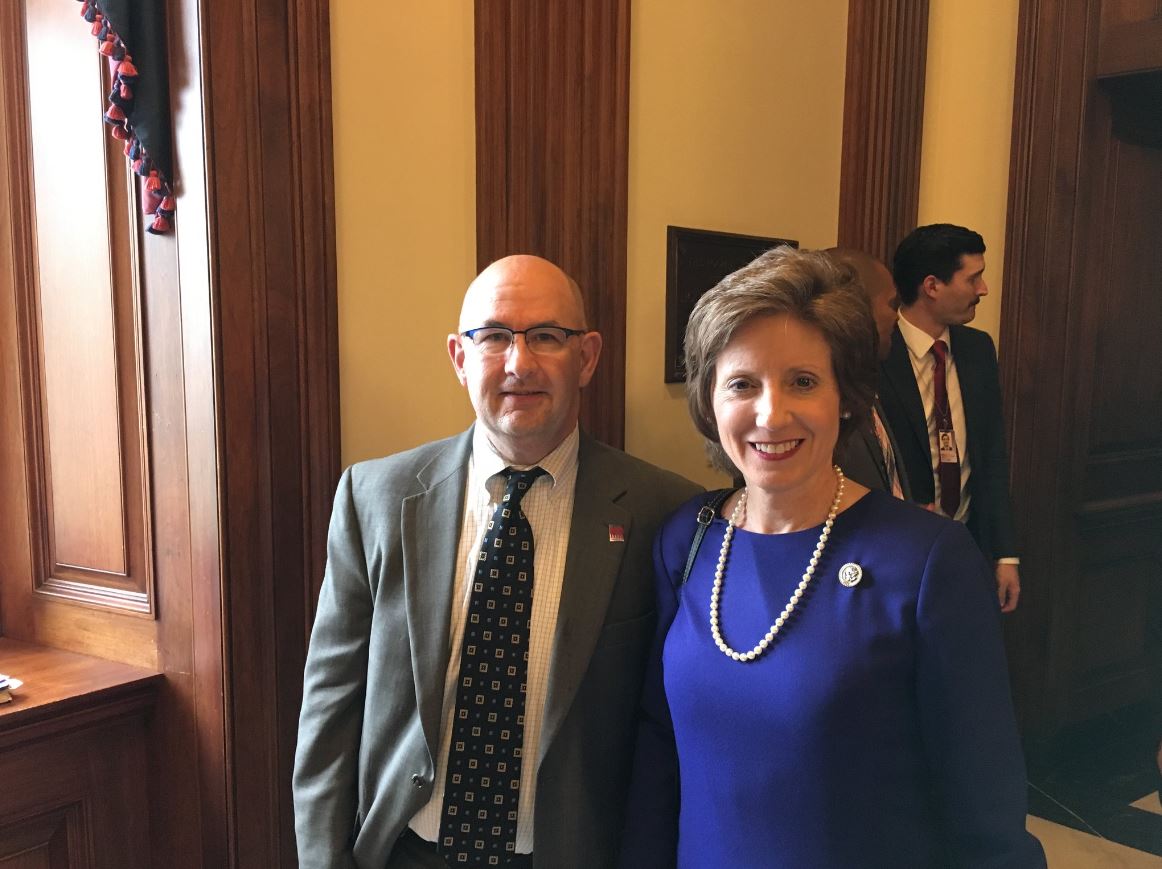 Thursday morning I met with Jim Kelly of American Society of Anesthesiologists to discuss how we can continue to combat the opioid crisis. It was a pleasure to hear Mr. Kelly's perspective on this vital issue for Missourians. Thank you for joining us in DC! 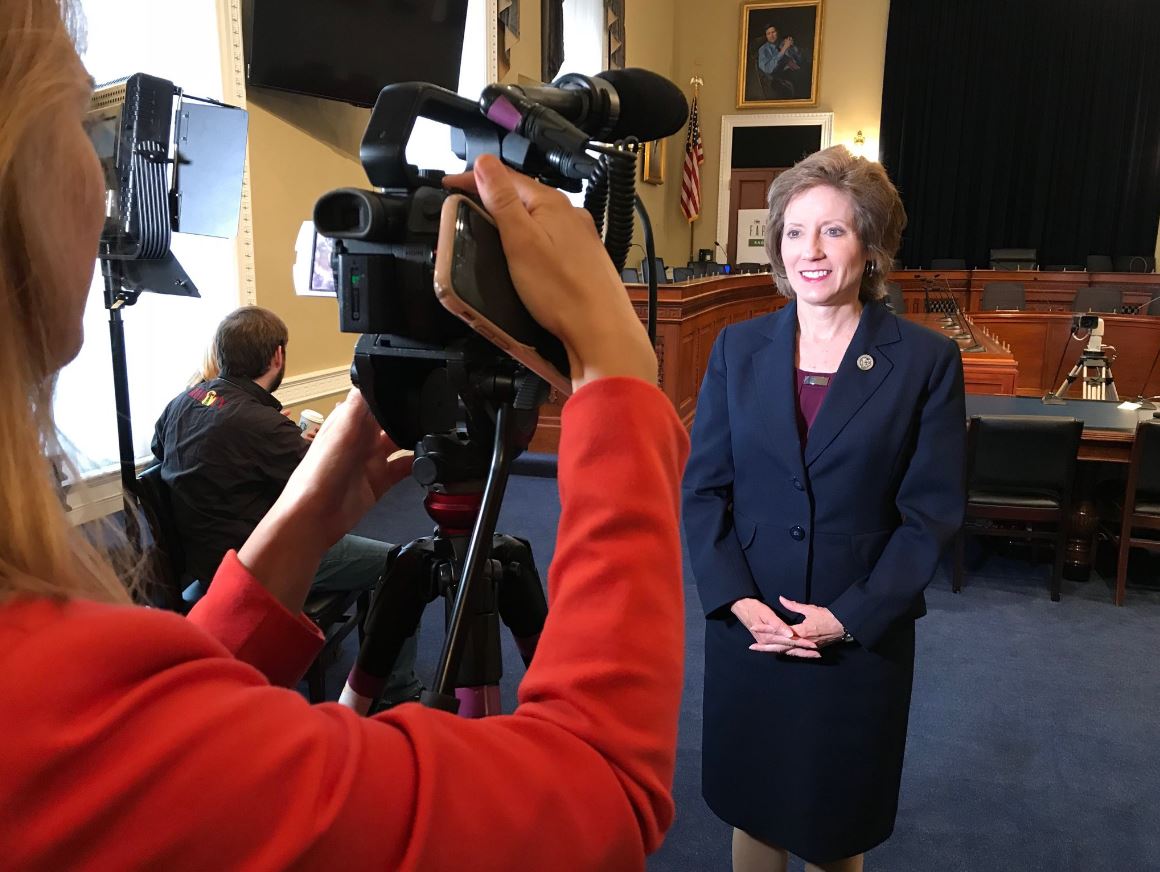 I talked to KYTV in Springfield on Thursday about my provision in the 2018 Farm Bill to help rural Missourians get high speed internet. It’s unacceptable that nearly two-thirds of rural Missourians still do not have access to this vital resource! 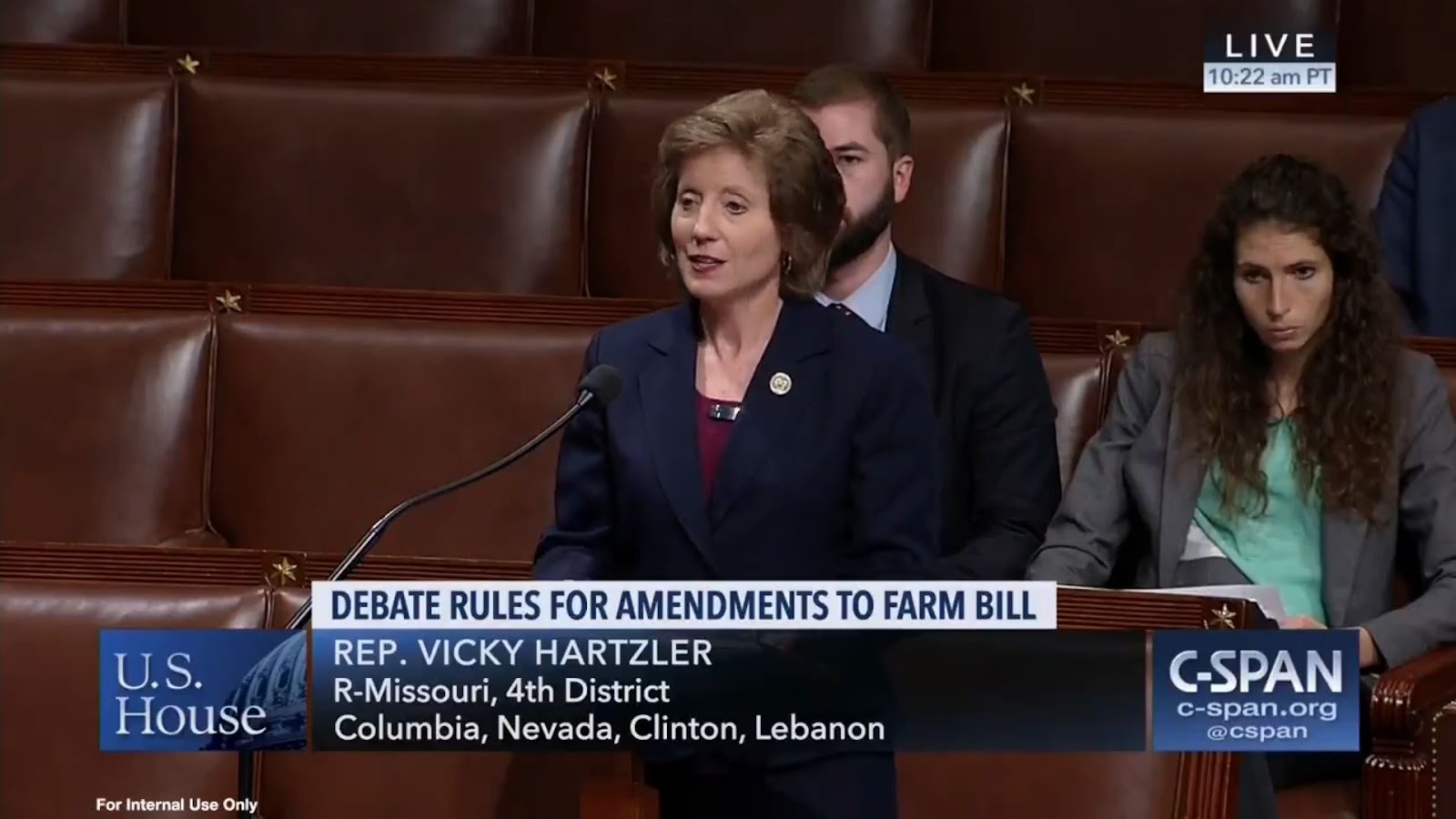 Thursday afternoon I spoke on the House floor to give my full support for the 2018 Farm Bill. This legislation strengthens our food supply, includes significant improvements to SNAP, and helps advance the deployment of high-speed internet to rural communities. You can view my remarks here or by clicking on the image above. 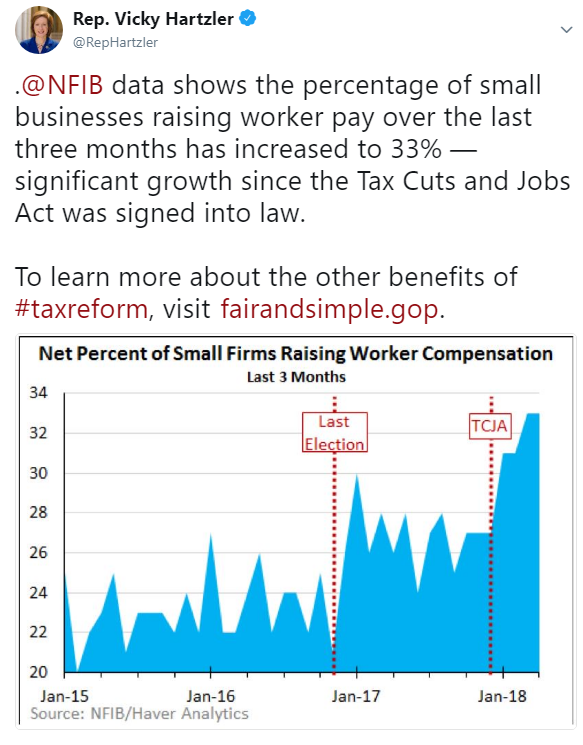 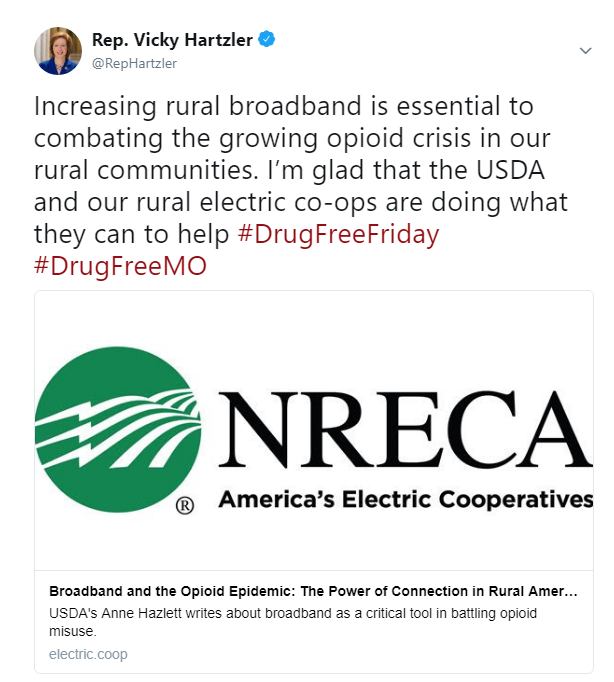